In Pursuit of Vision Zero

On the crisp evening of January 12, 2017, Sharon Parker was waiting for a bus on West Broad Street at the corner of Chantilly Street, across the street from Cook Out. The particular GRTC bus stop where she was waiting is in front of a Shell gas station and there are wide driveways on either side of the bus stop, providing multiple opportunities for cars to cross the sidewalk. We don’t know why she was there – maybe she was shopping at Willow Lawn or just getting off work. But we do know that at 8:10 PM, she was suddenly hit by a person driving a car and bounced off the windshield. Her shoes landed several feet from her body. She died at the hospital at 10:45 that night from her injuries. 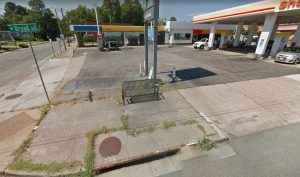 Just a few hours earlier that same evening, on the other side of town, a 59-year-old man was hit by a person driving a car at Nine Mile Road and Forest Avenue in eastern Henrico County. He was transported to the hospital, where he also died from his injuries.

January 12, 2017 was a tragic night in the Richmond region, and there have been many more since.

As Bike Walk RVA continues to push for more safe and accessible bicycle and pedestrian infrastructure and find new and fun ways to encourage people to bike and walk more, we are simultaneously faced with an alarming increase in pedestrian deaths in the Richmond region.

In Virginia, pedestrian deaths from traffic-related crashes have increased 55 percent from 2015 to 2016.[1] In May and June of this year combined, we’ve seen around a dozen bicyclist and pedestrian fatalities and serious injuries in our region caused by traffic crashes, and those are just the ones we know about. The National Safety Council estimates 38,300 people – the population of a small city – were killed and 4.4 million injured on U.S. roads in 2015, which saw the largest one-year percentage increase in half a century.[2]

And yet, all of these crashes are preventable. It doesn’t have to be this way. People should not die or get hurt trying to bike or walk home from work, out to dinner, or on their way to a friend’s house. We all deserve the freedom to safely get where we need to go.

For too long, we’ve considered traffic deaths and severe injuries to be byproducts of our transportation system; inevitable side effects of modern life. Vision Zero is a multidisciplinary approach, bringing together diverse and necessary stakeholders to address this complex problem. Vision Zero acknowledges that there are many factors that contribute to safe mobility – including roadway design, speeds, enforcement, behaviors, technology, and policies – and sets clear goals to achieve the shared goal of zero traffic-related fatalities and severe injuries.

By taking action at the local level to prioritize safety on our streets, we can create a new reality in which everyone is safe getting where they need to go, whether they are walking, biking, busing, or driving. It will require fixing our streets and building sidewalks, educating people about safe walking, biking, and driving practices, enforcing our existing traffic laws, and possibly creating new ones. This means engineers, planners, elected officials, police, hospitals, nonprofits, and the community all need to be on board and work together.

Bike Walk RVA is an enthusiastic Vision Zero supporter, but our work can only take this region so far. While we aggressively advocate for infrastructure improvements that make biking and walking safer for everyone (paved trails, protected bike lanes, sidewalks and crosswalks, calm neighborhood streets, etc.) we are not the ones who actually fix the streets. And while we encourage and educate people to bike and walk safely through seminars, pamphlets, PSAs, and so on, the truth is that we will not significantly decrease the number of people impacted by traffic-related crashes until our roadway infrastructure vastly improves. The area where Sharon Parker was waiting for her bus was designed for the car, not for Sharon Parker.

Leadership at the highest levels of our local governments must lead the charge in this direction. In March 2016, Richmond City Council adopted a resolution that “supports the development of a Vision Zero program for the City of Richmond with the goal of reducing traffic fatalities and serious injuries in road traffic to zero by the year 2030.”[3] This is a necessary first step, but we need to back this resolution up with action. The map below from the Vision Zero Network shows Vision Zero cities across the country – and Richmond is not included. The reason for this is that in order to qualify as a Vision Zero city, four requirements must be met: 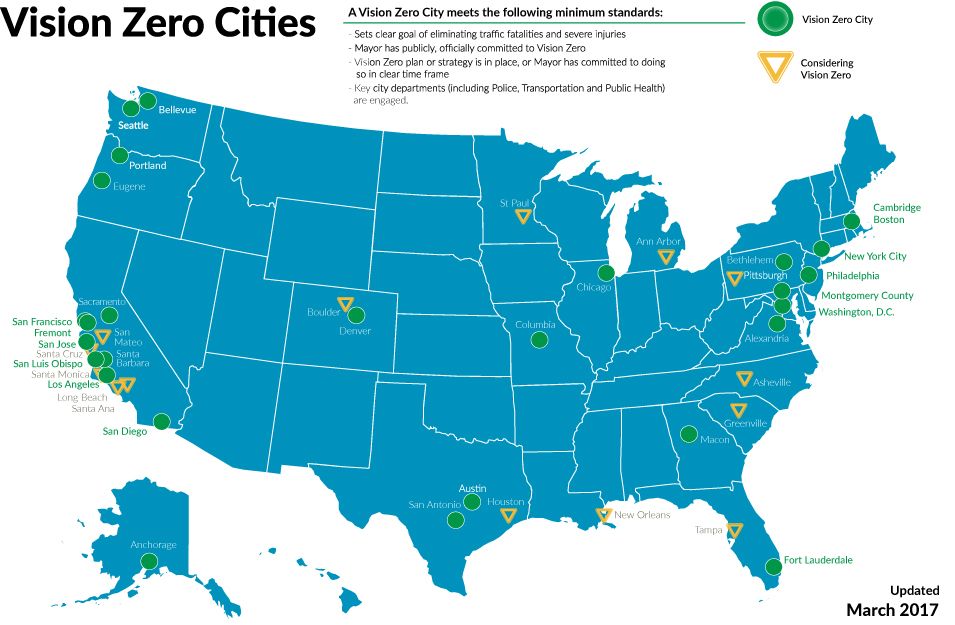 Richmond has arguably only met two of the four requirements. In order to realistically pursue Vision Zero in Richmond, we need a clear mandate from the Mayor’s Office to city departments and community stakeholders, and we need a plan of action. As Mayor Stoney makes the rounds through his Community Office Hours in all nine districts this summer, we are working with residents to show up and speak up for a Vision Zero Action Plan for the City of Richmond, and hopefully the people are being heard.

But what about the rest of the region? In the first half of this year, Henrico County has seen five pedestrian deaths and 50 pedestrian injuries and Chesterfield County has seen 4 pedestrian deaths and 30 injuries. The problem is not specific to Richmond City and we need leadership in the counties to step up as well. Richmond has taken the first step forward by passing the 2016 resolution, but the City is not that far ahead. What if all of our central Virginia localities worked together and created a regional plan to save the lives of people who are just trying to get from one place to another? That would be a bold statement to our residents that regardless of where you live or how you get around, you should be able to get there safely.

You can make a bold statement as well by taking our pledge today and personally committing to helping our region reach the Vision Zero goal.