By: Jacki Quinlan, Director of Community Outreach for Sports Backers 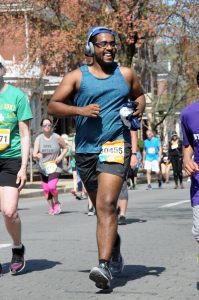 On the 1st of October, I sat down with Alan Delbridge to learn more about him and his new part-time role at Sports Backers. Read on to get to know the first-ever Head Coach of Kids Run RVA, which aims to provide support throughout the school year for the dozens of volunteer coaches that make it possible for youth all over Richmond to get active on a regular basis and develop a lifelong love of running.

Jacki: Tell us about where you are from and where you went to school.

Alan: I was born and raised in Chester, Virginia. I attended Enon Elementary (rest in peace, it’s been torn down now), Carver Middle School, and then I went to Appomattox Governor’s School in Petersburg. For college, I went to Virginia State University and graduated with a degree in Agriculture and a concentration in Environmental Science.

Jacki: Ok! So tell us when you started running.

Alan: Well I can tell you that I didn’t run in high school or in college or anything like that. I just woke up one morning and was like “huh, I want to run.” It was 4:00am and I just woke up and just ran. At the time I was living in Shockoe Bottom, so I ran into Church Hill and ran until the street numbers started to become letters. I was like “huh, I’ve never been in this part of the city.” So that’s what really got me started with running. At the time I was working with someone who also worked part-time with Fleet Feet Sports and they had just moved into Richmond. They had a ‘No Boundaries’ training team, and they were training for an 8k. So that was my first time training and actually running and I fell in love with it!

Jacki: So your first race was an 8k, as in the VCU Health 8k?

Alan: My first real race, yeah, was the 8k. I did it with the training team and it was a great experience – loved it.

Jacki: Cool! So you have shared some of your personal running memories. Can you share your best coaching memory? And tell us where you have been coaching with Kids Run RVA.

Alan: I coach at Boushall Middle School, this will be my fourth year, and I’ve been there since I started coaching. Best coaching memory? I have so 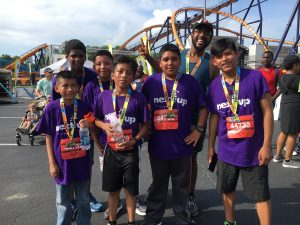 many good ones! With the kids, it’s always hilarious. You never know what they are going to say. But one of my favorite memories is the first time we went to Kings Dominion for the Run and Ride 5k and one student had never been on a roller coaster before. He didn’t know how to feel but he went for it and had a blast. There are so many great memories, too many to count.

Jacki: Why is Kids Run RVA important to you?

Alan: It’s important to me because I never saw myself as a person interested in sports. Never liked any sports, was never picked to be on any team. So, for me, it’s important because running is something that humans can do naturally, low equipment costs, you can literally just wake up one day and start running.

Jacki: What do you think it takes to be successful as a run club coach?

Alan: My favorite saying – they don’t care what you know until they know that you care. If you are not there for the kids, no matter how they come to you, then you are not going to survive. You can have the most technical training, you can be a teacher, it doesn’t matter. If the kids sense that you aren’t there for them, it’s not going to work. For me, it’s 100 percent your attitude with the kids and making it fun, as well as being there for them outside of run club.

Jacki: This head coach position is brand new for Kids Run RVA, so share with us how you plan to tackle this new position.

Alan: I love sandboxes. I love coming in and taking the materials that we have and building something new, fresh. I love creating an impact in a space that hadn’t been thought of before. I love challenges like this. What I’m doing is creating a road map – big picture first – which identifies timelines and goals that we all agree upon and then working towards those in a succinct way. I love a challenge and hopefully at the end of the year, it justifies why a head coach is important.

Jacki: Ok, so what can the Kids Run RVA coaches expect from you during this first year? 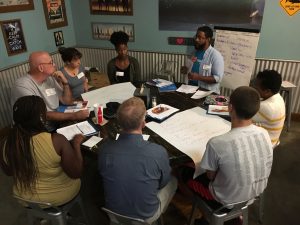 Alan: They can expect me to be there for them via telephone, email, and in person. I will be coming in and doing some observations. Definitely new coaches can expect to see my smiling face at their clubs as much as possible but also just being that ear because I’ve been there. Pretty much, any situation, I’ve seen it and done it. It’s always good to have someone that’s been there.

Jacki: Is there anything in particular that you hope to achieve in your first year as the head coach?

Alan: I think the biggest thing that I want to achieve is creating the plan that we discussed – the MSR plan, which stands for Motivate, Support, and Recognize. Really making sure we are capturing all of the great things that are happening at Sports Backers, as it relates to Kids Run RVA, and then having them succinctly in one space so we know what we are already doing really well and we know how to make ourselves better. So I think that’s the biggest goal I want to achieve is to create a solid plan for new coaches, returning coaches, and anyone in between.

Jacki: Is there anything else you would want readers to know about yourself, Kids Run RVA, or this new Head Coach role?

Alan: Know that this is coming from a place of love and compassion, not only for the coaches but it’s really all about the students – the little runners. If the coaches are in a great place and every run club is running efficiently, then we can change more than just a little runner’s mind, we can change the world. I really believe in the mission of what Sports Backers is doing and it’s great to be a part of crafting what the future looks like.