Max's Tales from the Trail - Volume 4

Max Hepp-Buchanan, Director of Bike Walk RVA, is currently riding his bike from Pittsburgh to Washington, D.C., on the Great Allegheny Passage and C&O Canal Towpath trails, a 334.5 mile route free from traffic and motorized vehicles. He is chronicling his journey, and below you’ll find his thoughts, observations, musings, and menu selections.

On day four of my tour, I ground out 75 miles on the C&O Canal Trail. I prefer the C&O to the Great Allegheny Passage, mostly because it’s flat, but also because it’s more interesting. The “trail” is really more of a double-track path, with each track no wider than six inches in some places. There are tree roots, rocks, mud puddles — all of which keep me on my toes and paying attention. There weren’t a lot of highlights on the trail today, except for Paw Paw, the epic tunnel. Both the canal and the trail run through Paw Paw, the trail pressed against the side of the tunnel and only about four feet wide. And it’s pitch black. It was a lot of fun to ride through.

I had a nice lunch at Weaver’s in Hancock, MD, which is a favorite of cyclists using the trail. Overall, it was a fairly uneventful day, until I set up camp. That’s when the comedy began. I was about to crawl into the tent I pitched along the canal in an isolated hiker/cyclist site, when I heard several bikes rambling along the trail above me. It was a group of four rag-tag dudes I had been playing leapfrog with for days. We hadn’t interacted much, until then. They all came down to my site to say hi and offered up a beer. I could tell they’d already had several themselves. One of them, a stout shirtless man with a haircut I can only describe as a mullet-hawk (Editor’s note: maybe something like this?), was wandering around the camp site when I heard him mutter something about a rotten tree from a few yards away. Moments later, he yelled “look out!” and the tree came crashing down just a few feet from where I was talking with the other three. Yeah, he pushed a tree over. “I got you some firewood,” he said proudly.

As strange as the group seemed at first, they were really nice and we had a good time comparing bikes and shooting the breeze. Later that night, when I was on the verge of sleep in my tent, I rolled over and felt something wet. I was surrounded by water! My Camelbak leaked a full pouch of water into my tent. So in the dark of night, I got to pull the tent up and dump about a half-gallon of water into the grass. Then I went back to sleep.

Stay tuned for more from Day 5. 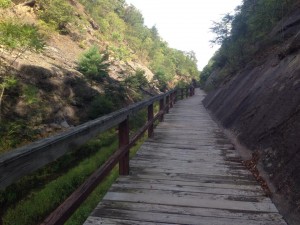 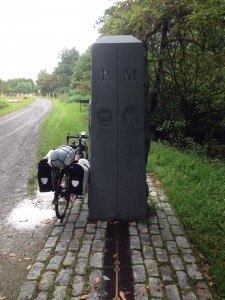 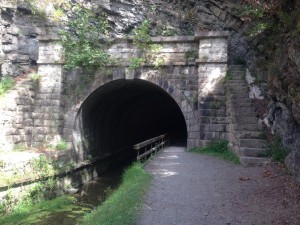 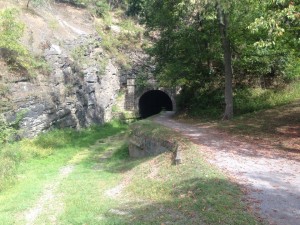