Max's Tales from the Trail - Volume 3

Max Hepp-Buchanan, Director of Bike Walk RVA, is currently riding his bike from Pittsburgh to Washington, D.C., on the Great Allegheny Passage and C&O Canal Towpath trails, a 334.5 mile route free from traffic and motorized vehicles. He is chronicling his journey, and below you’ll find his thoughts, observations, musings, and menu selections.

Packing up a tent and camping gear in the pouring rain is not my favorite thing to do, but I was left with little choice. Luckily, Brantley lent me his rain jacket (I forgot mine!) so I wasn’t soaked before starting the ride. The campsite was still pretty quiet – Eric wasn’t even stirring yet, and neither were the Mother Earth Fair attendees. I suppose they were all laying in their sleeping bags, listening to the rain and the trains. For the first few hours on the trail, I didn’t see another soul. I continued to climb at a gradual pace, but the wind and rain and wet sand of the trail made the ride feel sluggish, like I was pedaling on a ribbon of hummus.

I stopped in Meyersdale for a cup of coffee and found one shop that was open. The owner was closing in 15 minutes (at 11:00am?) and gave me a free cup of joe in my thermos. The rain was coming down really hard, so I stood under an awning and drank as much coffee as I could before pedaling the super steep hill back to the trail. The rain eventually stopped as I approached the Eastern Continental Divide. And then — downhill! I hadn’t coasted in three days, so enjoyed that for a few minutes before cranking up into my highest gear and pedaling as hard as I could down towards Cumberland, MD.

I crossed the Mason-Dixon Line and passed through two long tunnels; the first (Big Savage) had lights so I could see where I was going. But the second tunnel was black as night and all I could see was the light at the far end. I couldn’t tell how fast I was moving or where the walls of the tunnel were, and for a moment I felt like I was stuck in a vortex and would never emerge. I did, of course, and had to laugh at myself. And the descent continued. I enjoyed every minute of it, pausing once in a while to take a photo of the scenery (Editor’s note: selfie!).

Before I knew it, I was in Cumberland a little after 2:00pm. But I was cold and wet, and I knew I had four panniers of wet gear. I checked into a Ramada, bathed myself and my bike, set everything out to dry, and went hunting for food. I found the food, and I found an art show with more (free) food, and ate it up. So I didn’t stick with my plan of camping every night, but the cute outdoor pedestrian mall (similar to Charlottesville’s Downtown Mall) and the king size bed and shower will help me forgive myself. 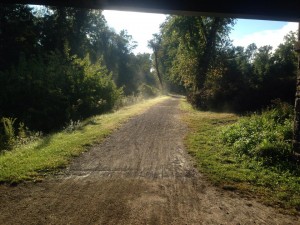 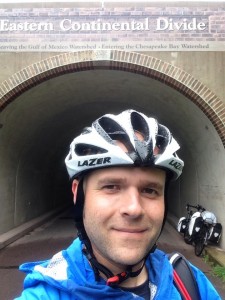 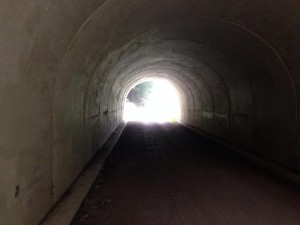 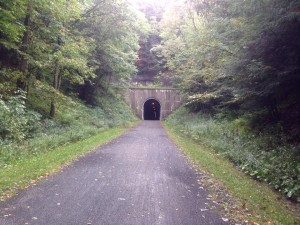 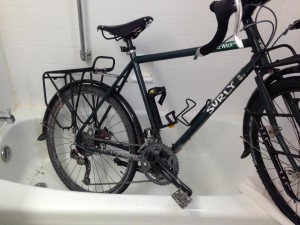