Kids Run RVA Showed Up and Showed Out at the kaléo Marathon Jr. 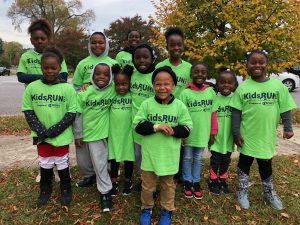 On a perfect fall day on Saturday, October 26th, 1,070 young runners filled Byrd Park to participate in the kaléo Marathon Jr. The youth running event for kids ages 4-14 featured three distances:  half mile (for ages 7 and under), one mile (for ages 12 and under), and the new two-mile course (for ages 14 and under). 880 of the participants represented Kids Run RVA clubs from schools and communities across the Richmond region. A program of Sports Backers, Kids Run RVA aims to provide active living opportunities for kids in all parts of the Richmond region and get more kids moving more often. Schools from the City of Richmond, Henrico County, Amelia County, Petersburg, and Chesterfield County were all represented as well.

Overall, Kids Run RVA helped support 60 area run clubs this fall, and 28 of those clubs took part in the kaléo Marathon Jr. Leading the way was Lakeside Elementary from Henrico with an incredible 119 kids taking part in the three distance options, while the City of Richmond had the highest number of schools participating with 12. 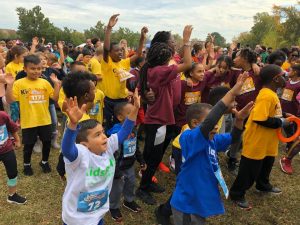 ‘Spirit’ was the theme of the day, as all run clubs participating were given shirts in the color of their choice with their team name to show their school pride. And, thanks to the generous support of VCU Health Richmond Marathon participants, other community and corporate partners and donors, Kids Run RVA provided 880 complimentary entries for kids to participate, 45 pairs of shoes to students in need of proper footwear to train, and also helped arrange transportation to and from the event. Run club participants trained hard throughout the fall to prepare for race day and achieve their goals, and seeing them show off their hard work on race day was inspirational for their coaches, parents, and volunteers.

The pre-race festivities kicked off at 10 a.m. with local mascots, music from local favorite DJ CJ, and the annual costume contest for participants running in their Halloween gear. Kids Run RVA’s leadership team was also well represented as Faith Hecht and Jacki Quinlin, dressed as Peanut Butter and Jelly, got the crowd going with their Peanut Butter and Jelly dance routine, which is always a crowd favorite. They were joined by Chaz Coleman, the newest member of the Kids Run RVA team who broke out his Tall Glass of Milk costume for the festivities. When not dressing up in costume to thrill audiences, the Kids Run RVA staff helps support the program and the army of coaches that make all the run clubs possible. Before the race could officially start, the Fitness Warriors led the warm-ups that had everyone hyped and ready to GO! 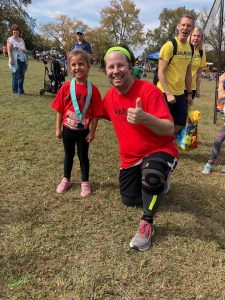 The half-mile race was the first event to start at noon, followed by the one-mile race at 12:15 p.m. and the two-mile distance at 12:30 p.m. Highlights included 785 kids taking part in the one-mile race and a male and female runner from Lucille Brown Middle School crossing the finish line first. The run club at Lucille Brown, known as ‘Brown on the Run,’ is offered by Sports Backers as part of the Next Up after school program in City of Richmond middle schools. A great sight in the two-mile race was Brian Campos, principal of Crenshaw Elementary School, running alongside one of his Kindergarten students at an impressive pace of 9:30 per mile. Having education leaders like Principal Campos serve as role models for their students is inspiring to see and there are many others embracing that role throughout the region. 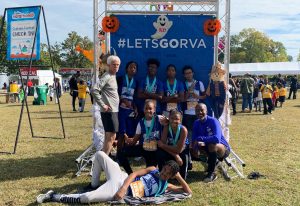 To help celebrate their achievement and the work that went into it, all participants received a commemorative medal along with post-race snacks, the post-race party went on until 2 p.m. Overall, the sixth annual kaleo Marathon Jr. was a great day for kids who took part and their families and friends who came to cheer them on. We are proud of all our Kids Run RVA clubs that participated. And of course, we want to give huge thanks to the families and coaches who inspire our kids to have fun and stay ACTIVE!