This month we sat down with Katie McTavish Daniel, who was recently promoted to Program Manager at Greater Richmond Fit4Kids. In this new

role, Katie now leads the Wellness Integration and Learning Garden programs throughout the Greater Richmond region. Katie got her start as a PE teacher but after switching career paths to do wellness integration programming, she began leading a Kids Run RVA run club at each of the schools she has been assigned to. Although she will no longer be assigned to a specific school, she reached out and expressed a desire to continue coaching. Her exact words? “It’s the favorite part of my day!” We were pretty sure lots of you could identify with that feeling so we decided to learn a little more about this new mom, new Program Manager, and veteran Kids Run RVA Coach. Read on to get to know Coach Katie:

How long have you been coaching?

I have been coaching for five years. I’ve coached at Holladay, Bellevue, and Chimborazo elementary schools. And, before that, I did a before-school boys club at John Rolfe Middle.

What are some traits that define you?

I’m going to give you three – positive, loyal, and hard working.

What chore do you absolutely hate doing?

Unloading the dishwasher. I don’t mind loading it. I hate unloading it.

If you could learn to do something new, what would it be?

When you have 30 minutes of free time, what do you do?

What is the best vacation you’ve been on?

Ooh, we went to the Maldives on our honeymoon. M-A-L-D-I-V-E-S, it’s south of India. I’m trying to think of something to compare it to. Kind of like the Caribbean, but just way remote.

What would you most like to tell yourself at age 13?

It all will get better.

At what age did you become an adult?

If you could be any fictional character, who would you choose?

The Little Mermaid because I’m not a very strong swimmer and it would be nice to be able to swim anywhere I wanted!

If you were to write a self-help book, what would the topic be?

“How to Deal With a Crazy Family.”

What is the first concert you ever attended?

The Lilith Fair with my aunt. Do you know what that is? It’s like the Dixie Chicks. I wanted to go see the actual Dixie Chicks, but we went to the Lilith Fair instead. and I was like eight years old! Yep, that was my first concert.

What one food do you wish had zero calories? 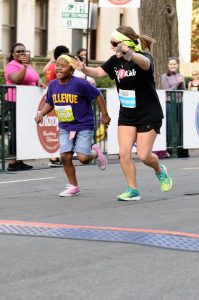 What advice do you have for kids who are struggling in school and/or run club?

Hmm, that’s a good one. Stay focused, and there’s lots of people who care about you.

If you could meet anyone, living or dead, who would it be?

Dax Shepard. He has a podcast that I really, really like called Armchair Expert.

Would you rather be a cat or a dog?

A dog! They get to go outside more and they get to sleep a lot.

How would you define success?

Who is your role model?

My sister, Kristen Cross. She’s a fellow run club coach, at Crestview Elementary, and she has always been there for me and led me in the right direction.

What is your favorite thing about coaching with Kids Run RVA?

Obviously the kids and getting to see them accomplish things that they didn’t think, or even know, that they could do.