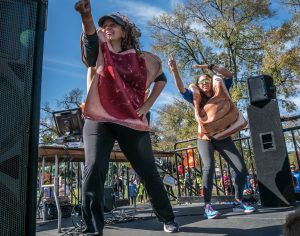 With the beginning of the school year right around the corner and the kickoff of Kids Run RVA run clubs looming, it’s almost time for the dynamic duo, aka Jacki Quinlan and Faith Hecth, to rock the famous PB&J costumes at the kaléo Marathon Jr. on October 26. Behind the scenes, we’ve been busy preparing for the fall season so that kids all over the region can get moving at their local run clubs. But who exactly is it behind the scenes for Kids Run RVA and wearing those PB&J costumes? We thought you might want to get to know Jacki, the Director of Community Outreach, and Faith, the Youth Programs Manager, a little better as we prepare to embark on a fun school year of running.

If reading this interview leaves you wanting to get to know Peanut Butter & Jelly more or feeling like you want to get involved in Kids Run RVA, consider applying to become a volunteer coach today! We are accepting applications through September 4th and will be hosting a New Coaches Clinic on September 12th – where you can meet PB&J in person!

Read on to learn more about us two gals!

How long have you been coaching?
Faith: I’ve been helping with Albert Hill Middle School’s Tiger 10k Training Team for the last six years, as one of a dozen or more assistants to the fabulous Stephanie Perry. Our daughters played soccer together years ago, and one day a conversation on the soccer field about run clubs got us to where we are today. It’s been a wonderful experience.

Jacki: Let’s see . . . I’ve been working at Sports Backers for five years now and started coaching about three years before that so I guess a total of eight years! I started coaching with Jill Diefenbach when we both were working at Oak Grove and I’ve been coaching there ever since. Over the years I’ve also had the opportunity to coach at Shady Hill and Greenleigh mobile home communities, Martin Luther King, Jr., Middle School, Elkhardt-Thompson Middle School, and the Southside Boys & Girls club.

What are some traits that define you?
Faith: I don’t know….indecision??? HAHA. I hope I’m a good listener and a good friend.

What would you name your autobiography?
Faith: Twin A (yes, I’m an identical twin, and we were unnamed for a good week before our parents made up their minds.)

Jacki: “Not Your Average White Chic.” Yep, I said it. I’m known for being up for talking about race and culture – topics that some find uncomfortable. I was raised by my mom and stepfather, who is a black man, in a black community. Unconscious bias is real and folks unintentionally think they know certain things about a person based on the color of their skin, which has been an interesting dynamic for me to navigate over the years. An important part of our work involves really getting to know people and understanding their life experiences to better relate to them. That’s what I try to do with every run club participant we coach, and I hope people are willing to do that with me as well.

What chore do you absolutely hate doing?
Faith: I’ll stick with what seems to be a favorite with this crowd, which seems to be unloading the dishwasher. Scouring the back yard to scoop dog poop is up there, too.

Jacki: Is it bad to say that I hate all chores? I have to be in the mood to clean. Once I’m in the mood, it’s all good and I knock it out. Otherwise, I hate them all!

If you could learn to do something new, what would it be?
Faith: In my next life, I’d like to become a wickedly cool mountain biker chick. I love to ride, but still consider myself a chicken. This and snowboarding, so I can throw myself down a mountain the way my husband seems to do without a second thought. But, same thing. I’m a chicken.

When you have 30 minutes of free time, what do you do?
Faith: This empty nester would probably text or Face Time her kids for a laugh. One  is in DC, one is in Colorado.

Jacki: Scroll Facebook (less these days – I’m working on that!), watch one of my favorite shows on Netflix or Hulu (Orange is the New Black, Grownish, The Handmaid’s Tale), straighten the house.

What is the best vacation you’ve been on?
Faith: My best memories have been family vacations to our National Parks. Hard to choose a favorite, but Arches and Grand Teton are magnificent. Glacier, too. And, a family trip two years ago to Argentinean Patagonia. SPECTACULAR. My mom is Argentinean, so spending time there meant so much. Viva Argentina!

Jacki: My favorite vacation has to be Topsail Island. Spending quality time with my mom, brother, and daughter in a beautiful place, eating fresh crabs, sleeping in, swimming, laying out on the beach – it’s just such a laid back place to truly relax.

What would you most like to tell yourself at age 13?
Faith: Just embrace the frizzy hair.

Jacki: I grew up pretty poor, which was tough and made me feel “less than” sometimes. But knowing what I know now, I would tell myself that this is temporary and you have the power to change your circumstances.

At what age did you become an adult?
Faith: At age 25, when my son Morgan was born. And, again, when my dad passed away from cancer in 2007.

Jacki: At age 18. Shoot, maybe even before. I started working on the weekends, eight-hour shifts every Saturday and Sunday, when I was 14. I was the first of my family to go to college so I had to navigate that largely on my own. I had to figure out how to fill out a FAFSA financial aid form, get myself moved into the dorms, find a job, all on my own, so that forced me to grow up quickly!

What is the first concert you ever attended?
Faith: When I was 13, I cried until my dad gave in and took me to see The Jackson Brothers’ Victory Tour at RFK Stadium in Washington, DC.

Jacki: When I was at VCU, I went to a Sting concert at the Richmond Mosque, which is now the Altria Theater. I was head over heels for that man, solely based on the way he sang those songs and put on that show!

What one food do you wish had zero calories?
Faith: C-H-O-C-O-L-A-T-E!

Jacki: Just one?? Shoot, it would have to be either cheeseburgers or pizza. I love them both and hate that they are both so loaded with fat and calories!!

What advice do you have for kids who are struggling in school and/or run club?
Faith: You’re not competing with anyone else here. The competition is with yourself. Believe that you can accomplish this goal.

Jacki: This too shall pass. Right now you may feel relatively powerless over your circumstances but this time is going to fly by and, before you know it, you will be in complete control over your destiny. But you have to set yourself up for success in that near future – making the right choices now will help you be the best person you can be when you grow up. The choices you are making now do make a difference in the long run.

If you could meet anyone, living or dead, who would it be?
Faith: Michelle Obama.

Would you rather be a cat or a dog?
Faith: A dog…all day long. The Hechts are not cat people. Sorry.

Jacki: A cat! I’ve got two cats at home and I love how they do things on their terms – not easily trained, pet me when I want to be pet, and self-sufficient (don’t need to be taken out on a walk or taken outside to go to the bathroom). They are also just way more laid back than dogs – rarely do you see a cat running around the house and jumping on people!

How would you define success?
Faith: Watching my kids grow into kind, decent, and confident young adults. Now, all I wish for is their happiness in their work and relationships.

Jacki: Success looks different for each individual but, in my opinion, success is being the best version of yourself.

Who is your role model?
Faith: Twin B. Although I am technically two minutes older, my sister Andrea embodies all that is good. She is my father’s daughter, following in his footsteps of service to this country. Her love for the African continent and its people is immense, and she has dedicated her entire professional life to them through her work at US AID (US Agency for International Development). Her experiences in South Sudan and Kenya have enabled her to better understand how important it is to be part of the global community and to bring a truly compassionate eye to most any situation. I just adore her.

Jacki: Not sure I have one. I respect things about each person I know but I don’t idolize any one person.

What is your favorite thing about coaching with Kids Run RVA?
Faith: Spending time with itty-bitties now that my kids are adults.

Jacki: All the love I receive from the kids. As a Coach, my role is to motivate the kids and make them feel good about their efforts but, in the end, I get just as much out of the relationship! The kids motivate me and make me feel good about what I do as a Coach.