Kids Run RVA Is On The Move

With 69 Kids Run RVA clubs meeting (and running) throughout the region, there are plenty of activities to spotlight and ways to get involved moving forward. Check out these highlights and upcoming events, and get in touch if you’re interested in serving as a coach or volunteer!

The Whole Foods Marathon Jr. on October 28 at Byrd Park is the most exciting youth running event on the fall calendar! For the 2016 event, Kids Run RVA supported 758 youth in participating by providing complimentary entries and team t-shirts, as well as covering the cost of race-day bus transportation, and we want to bring even more this year!  Learn more at http://www.sportsbackers.org/events/marathon-junior/ or contact [email protected] or [email protected] to get your school or run club involved! Overall for 2016-17, we had 18 new run clubs from all over the Richmond region join Kids Run RVA, and our goal is to continue growing that number each year!

The Ukrop’s Monument Avenue 10k presented by Kroger and the Virginia529 Kids Run took place on April 1 with great Kids Run RVA representation in both events. 45 of the 69 Kids Run RVA run clubs took part this year, which is a record number for us! Kids Run RVA provided 708 complimentaryentries for the Virginia529 Kids Run and 306 discounted Ukrop’s Monument Avenue 10k entries. This year, we had a few of our elementary groups decide to take on the full 10k – a big shout out to Crestview Elementary, Fairfield Court Boys & Girls Club, and Swift Creek Elementary!

Every other year the Virginia Foundation for Healthy Youth organizes the Weight of the State conference to highlight Virginia’s efforts to create healthier communities, and Kids Run RVA was honored to be selected to present at this year’s event in April. We explored the issue of physical inactivity, delivered an overview of how the Kids Run RVA program works, and provided insight into how other communities throughout the commonwealth could implement similar programs.   To top it off, the event was attended by Governor Terry McAuliffe and First Lady Dorothy McAuliffe!

It doesn’t take much equipment to start running, but with many of the youth that are in our run clubs lacking the resources to purchase running shoes, Kids Run RVA works to address those needs. Thanks to generous donations, our fundraising efforts, and great partnerships with local retailers, we were 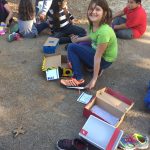 able to provide shoes to 128 youth runners this school year! And thanks to our partnership with the Richmond Road Runners Club, we were able to award a total of $13,400 to support run clubs and school-based running events at 36 different schools. With Global Running Day taking place last month, Kids Run RVA was also one of the local beneficiaries of ‘The Big Run’ put on by Fleet Feet Richmond. Nearly 100 people took part in the early morning run and a portion of the proceeds helped support Kids Run RVA!

This year we surveyed both run club participants and their parents. Of the surveys distributed, 245 youth surveys and 43 parent surveys were completed and returned.  We are excited to provide a brief summary of survey results with you! 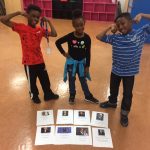 Of the youth that completed the survey:

Of the parents that completed the survey: 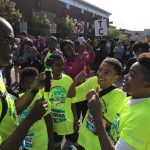 This feedback indicates that the programming is succeeding in meeting the needs of our participants and communities! Kids are getting active, having fun, participating and socializing with friends in safe environments, benefiting from the support of positive role models, and feeling good about making healthy choices! It’s an exciting time for Kids Run RVA and we’re gearing up to get more kids active more often as we move forward!