The big win on Floyd Avenue.

Yesterday, the Floyd Ave Bike-Walk Street project was finally given the green light! In their third and final hearing of the project, the Planning Commission voted to approve a revised design and send the city’s first Bike-Walk Street forward into the implementation phase.

But there’s more to the story that what was reported in the recent media coverage (here and here). The real success we are celebrating today is how a community came together with the help of our elected leadership and compromised on a design that works for everyone. I’ve been doing urban planning and advocacy work for a long time, and I rarely see happen what I saw yesterday. But let me back up a sec.

Since we last covered the issue, the City’s project team has been scrambling to address about a dozen requirements put on them at the last Planning Commission meeting on January 20. The issues the Planning Commission asked the project team to address included a lowered posted speed limit, lighting, street trees, curb ramps, parking requirements, and several others. The City spoke specifically to those elements yesterday, and spoke well. But would that alone have been enough to pass yesterday? Based on the previous Planning Commission meeting and the Urban Design Committee meeting before that, it’s honestly hard to say.

The new development that really put the project across the finish line was a design alternative that was created in a meeting called a couple of weeks ago by Councilmember Samuels, moderated by Councilmember Agelasto, and attended by Public Works and the consultant, several residents who had serious and ongoing concerns about the project, and us – the advocates.

In this meeting, six intersections were listed as the most concerning to those opposed to the project. Of those intersections, we determined four of them were on the table to discuss. At the end of the hour and a half meeting, we agreed on a proposal that would eliminate the traffic circles at the intersections of Strawberry, Rowland, Plum, and Harvie, and replace them with three-inch raised crosswalks (imagine the raised crosswalk at Sheppard and Stuart, behind the VMFA) at each intersection. The rest of the traffic circles (and the curb bump-outs) would remain. 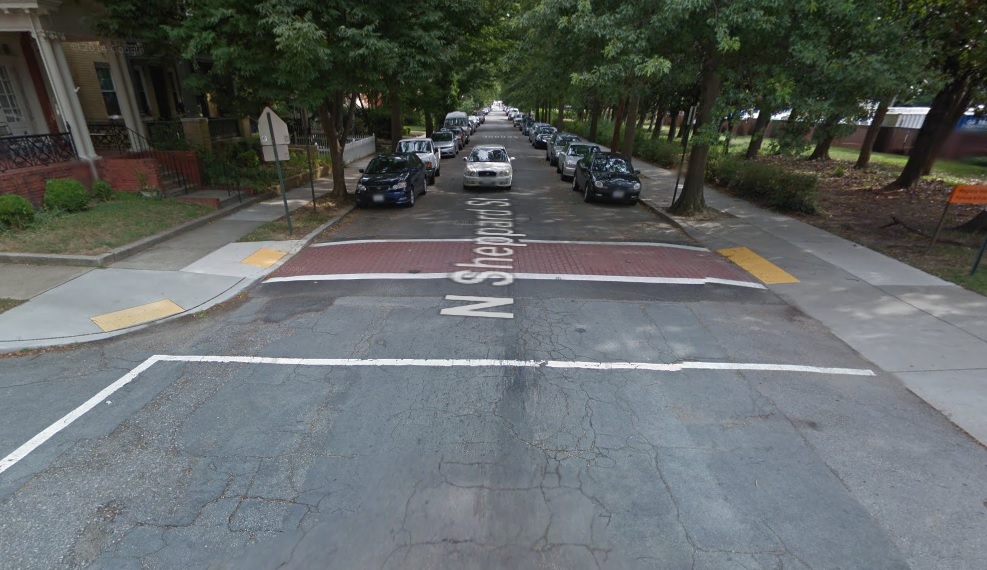 Everyone had left that meeting feeling fairly satisfied until we were told by Traffic Engineering that the three-inch raised crosswalks were not acceptable and we’d have to settle for one-inch. We all went into the Planning Commission meeting yesterday feeling unsure about whether or not we would get the outcome we wanted. The original plan was presented, then the alternative we had discussed. And then, a miraculous thing happened: when asked for public testimony, everybody, including the individuals who had spoken in opposition time and time again, stood up and spoke in favor of the agreed upon design. It was clear that the community was finally unified (or mostly, anyway) and was pushing together to get the Bike-Walk Street project passed.

Despite concerns expressed by the Fire Department and the City Traffic Engineer about the raised three-inch crosswalks, the Planning Commission was seriously considering the idea. Commissioner Jeff Sadler introduced a motion to approve, under the condition that all the other crosswalks were given higher visibility than what was proposed in the plan. After a lot of discussion by the Planning Commission, and some dissent, Mr. Sadler saved the day by asking one final astute question: would the raised crosswalks slow down a fire truck driving on Floyd Ave any more than the existing four-way stops signs? The answer was no, and that sealed the deal. Four of the six commissioners still in attendance (it was a long meeting) voted in favor of the motion to approve and two (Melvin Law and Doug Cole) voted against. And just like that, the Floyd Ave Bike-Walk Street project was pushed forward to implementation.

This is a unique success story that I hope I get to tell again and again in the context of future projects. While there was very strong support for this project – including nearly 600 petition signers (THANK YOU!), hundreds of letter writers (THANK YOU!!), and dozens of people who have spoken in support (THANK YOU!!!) – there were still some real concerns expressed about the project that weren’t going away. Without the leadership of Councilmember Samuels and Councilmember Agelasto, and the open minds of Tom Innes and several other residents with concerns, this compromise would not have happened.

We are confident that with the new design elements of branding and signage, highlighted shared lane markings, a lowered speed limit of 20 MPH (to come through City Council), more varieties of traffic calming, and higher visibility crosswalks, this project is much better than what was presented in the conceptual design. And will it change over time? Almost certainly, the answer is YES. It still won’t be perfect when it is built, and we’ll continue to work with the community to make sure it gets even better in the years to come.