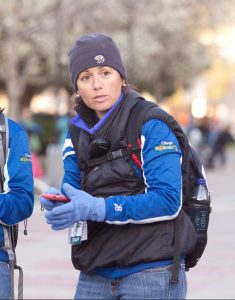 For most people, the Sports Backers Marathon Training Team is the start of a running journey that leads to many races and many miles. For Faith Hecht, it also led to a job at Sports Backers and a 15-year journey that combines her love of running with her commitment to creating active living opportunities for people of all ages.

Faith started as a volunteer coach on the Marathon Training Team (MTT) in its inaugural year of 2002.  After six years in the Army, Faith’s husband Olivier was working for Circuit City in Pennsylvania before being transferred to Richmond and he, Faith, and their kids Morgan and Lauren headed south in 2001. Shortly after arriving, Faith decided to attend a Richmond Road Runners Club meeting to get a feel for the local running community. At that meeting, MTT Head Coach Don Garber gave a presentation about the new program and was looking for coaches to join. Faith had run two marathons by that point and figured it would be a good way to meet people and learn her way around her new city.

After several years as a MTT coach, a position opened at Sports Backers that allowed Faith to work for the organization while continuing to serve as a MTT coach. She gradually transitioned to working as Youth Programs Manager and coached MTT for a total of 11 years. She now focuses on youth running programs and innovative ways to help area kids become more active. She has also been a key part of the Times-Dispatch/Sports Backers Scholar-Athlete Awards program, which has awarded over $1,100,000 in scholarships to 558 outstanding student-athletes from the Richmond region.

Faith’s love of active living extends beyond her day job at Sports Backers. She has served on the Healthy Recreation Committee at the National Park Service’s Richmond National Battlefield Park, and in her free time she can often be found on the trails of Pocahontas State Park, enjoying a mountain bike ride with Olivier or a hike or run with her dogs Darcy and Olive. As a former resident of Colorado, she travels back as much as she can for new adventures, and has an added excuse now that Lauren is in school at Colorado College. She is also very low key about the fact that she went to Princeton University and is the only Ivy League grad on staff, but if you press her on it she can tell you all about it in the several different languages she speaks.

It is no exaggeration to say that in Faith’s 15 years at Sports Backers, she has helped hundreds of thousands of people (and counting) of all ages get active, whether they are setting out to finish a marathon or just discovering a lifelong love of physical activity. She’s a trusted colleague and friend and we look forward to many more years!