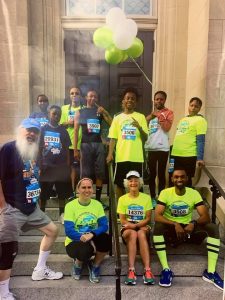 Gene Parris has been teaching in Richmond Public Schools system for 15 years (seven at Albert Hill Middle and the last eight at Henderson Middle). He was accustomed to the lack of after-school programs at his middle schools until NextUp RVA gave him an opportunity six years ago. Playing basketball growing up, Parris initially wanted to create opportunities using that sport. However,after thinking about how many existing basketball opportunities were already available to students, he thought another sport that he participated in during his high school years might be a better option: running. “I wanted to help these students find another avenue athletically that could help them get into college other than basketball and football,” Parris said. For this reason, specifically, he started the run club at Henderson.

Parris, known as the ‘Smoothie King’ for incorporating smoothies as a special run club incentive, is now in his sixth year as the head coach at Henderson. When developing the run club program, he wanted to make sure the focus was on fitness and wellness for students. Parris realized that if he was going to ask his kids to put energy and effort into their running, he would also have to help provide the proper fuel and nutrition for their activities. “Exercising has value,” Parris explained, “but there is also value in putting the right things in your body.” The smoothie is now an incentive that Parris uses to encourage more students to participate in the run club at Henderson and develop healthy habits, even if they don’t realize it at the time!

Read the rest of our interview below:

Chaz Coleman: What are some traits that define you?

Gene Parris: One of the biggest traits that helps draw kids to me is that I can be a kid at heart. I know kids are in school all day 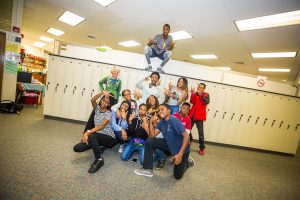 and so I try to allow run club to be an escape for them. I think me being able to relate to them as well as being silly and goofy is my biggest trait. I also think they feel that I genuinely care about them, so they respond differently to me because of this.

CC: If you could learn something new, what would it be?

GP: It would be to learn different routines when we do cross training inside. When it rains, run club is not canceled. We stay inside the building and cross train. I came up with a routine that we have been doing for the past four or five years. I just want to break the monotony of doing the same thing.

CC: If you had 30 minutes of free time, what would you do?

CC: What would you most likely tell yourself at age 13?

GP: Work on your ball handling (chuckles). That is what I tell my eight-year-old son now so that is what I would tell myself.

CC: If you could be any fictional character, who would you choose?

GP: I read a lot of fictional books, so this is a tough one. It would be Eragon. He is magical and is essential like Lord of the Rings, except he also has a dragon. The book is written by Christopher Paolini.

CC: What one food do you wish had zero calories?

GP: I don’t have to worry about calories, I need all of the calories I can get! I do love a good steak, and seafood as well. My wife and I go to Morton’s Steakhouse every year for our anniversary. I also like Croaker’s Spot and Mama J’s Kitchen (I recommend the catfish bites). It is some good quality food in Richmond!

CC: What advice do you have for kids who are struggling in school/run club? 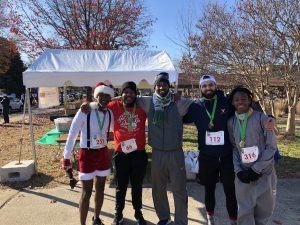 GP: With school, a lot of times the advice doesn’t need to go to the kid but to the parent. For a kid who is struggling in school a lot of times it is the attitude they come to school with. When you don’t go to class you are taking money out of the pockets of your 25-year-old self. Getting them to see the purpose of school is difficult, especially if they don’t have the support at home. I believe education is the byproduct of coming to school, but the purpose of coming to school is to set yourself up for the job that you want. In a few years you will be an adult and you’re going to have to use something that you learned in school. The people who leave here with the most are the ones that have most opportunities and more options.

With run club, it is more important for these inner-city kids to get exposed to as many different things as possible. You might come to run club and enjoy it but realize there is something else you want to do. I always tell them to go out and try something else. If they really love run club then stay but if not, they should try something new. NextUp is the perfect place to try new things. They should take advantage of the opportunity to explore! 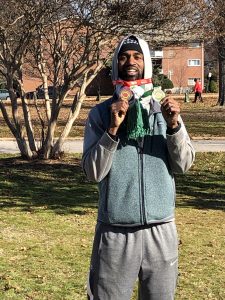 CC: What is your favorite thing about coaching with Kids Run RVA?

GP: Seeing my kids take what I am bringing to their table and incorporating it in their own lives. They may never run track in high school, but as long as they gain knowledge on how to live a healthier life, that is more important. For example, one student ran with me for three years. He finished his first 10k and kept working, and eventually shaved his time down by an hour and cut over 50 pounds! I also want to open another avenue for my kids to get into college. I have a few former run club members running at John Marshall High School and Highland Springs High School so hopefully they will be my first collegiate athletes!