Why do we like to ride bikes? For fun, exercise, community, to be able to eat whatever we want—the reasons are endless. Last night [10/23] we talked about the importance of these reasons, especially for women at the Richmond Women’s Cycling Summit. This was the first meeting of its kind in Richmond—an open dialogue with a panel of experienced women cyclists discussing some of the challenges and barriers female cyclists face. It was apparent from the turnout last night—over one hundred people!—that women want more. A strong community of women cyclists is vital, and some things need to change in order for this growth to take place. 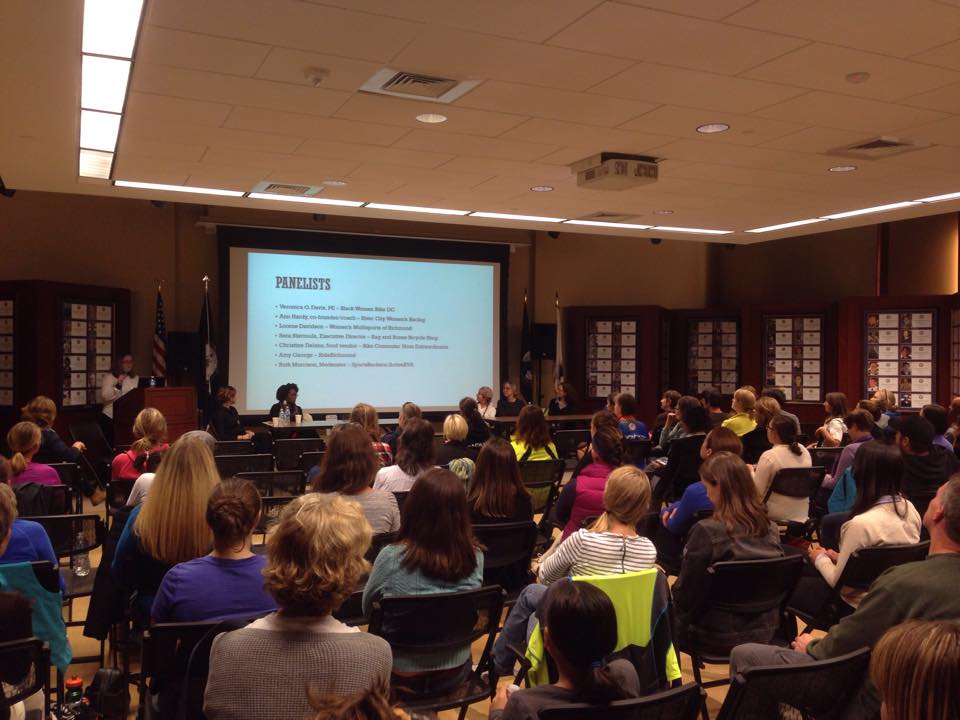 Women cyclists are thankful for male riders and everything we learn from them, but sometimes we feel intimidated or not as strong on a bike in male-dominated group rides, in bike shops, or mingling with traffic, and this may prevent us from gaining adequate skills needed as we continue to ride, or to even get started. Last night we were able to hear from a group of women who have been riding for transportation, racing, organizing riders, and working in bike shops for years. It was extremely encouraging to hear how they got started and how they are influencing the cycling world one step at a time. Of course, feeling empowered enough to ride a bike confidently should be the first. Veronica Davis, with Black Women Bike DC, drove home the importance of inclusion among all socioeconomic groups and to realize that a lot of folks are not currently in the mix.  Perhaps the most important theme to take away from last night is of women cyclists helping and encouraging other women cyclists to get started and to get the most out of riding…for whatever purpose.

One of the biggest items discussed was the issue of feeling unsafe on main roads. Some of us would love to bike the 1, 2, or 10 miles to work, but because of a lack of bicycle infrastructure on roads with heavy traffic, we leave the bike at home. In general, women feel less empowered to hop on a bike and fearlessly tackle the roads in Richmond. Some barriers cyclists face are the lack of bike parking and facilities, unsafe roads with no dedicated space, and hostility from motorists. These barriers inhibit our ability as cyclists to serve as positive role models in our community. This is what Bike Walk RVA works to change. We know that safe, inviting, dedicated spaces for bike riders and pedestrians will get more folks empowered to start. With improved bicycle infrastructure (protected bike lanes and paved trails), this goal is reachable.

Last night was a big step—or pedal stroke—in the right direction. Women cyclists should empower each other and encourage the rise of other women leaders as we continue to grow as a community. Speak to your elected officials about the need for dedicated bike infrastructure, support the women in your life who want to ride, and get out and ride yourself to be a part of a growing community of women who choose to bike for jobs, for their families, for their city, for their health, or just for fun!