Looking back on 5 years of RVA Bike Month

Some people like to say “Every day is Bike to Work Day,” and for an ever-growing number of people, that is true. For some, Bike Month is becoming increasingly, well, more months than just May. In the Richmond region, RVA Bike Month now includes March, April, and June. It’s safe to say that RVA Bike Month, presented by Bon Secours in 2017 and 2018, has grown a lot.

55 events, largely organized by volunteers, and 4,000 participants has earned RVA a pretty amazing distinction: according to the League of American Bicyclists, the nationwide advocacy organization that started and manages the National Bike Month program, the Richmond region’s bike month has the largest number of events (regardless of community size). Tell us that’s not cause for prideful celebration! 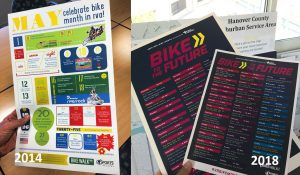 2018’s edition marked some new successes. Richmond was able to build, finish, and cut the ribbon for a brand new bike lane all in the span of one month. And it was our region’s first two-way protected bike lane, right in the heart of downtown on Franklin Street. Here’s a video recap of Richmond Bike to Work Day:

We also conducted nominations and presented awards for the first RVA Bike Month Awards in five categories: Best New Bikeway, Committed Bike Commuter, Best RVA Bike Month Event, Bike-Friendliest Business, and Advocate of the Year, and the nominations and voting were so strong that we awarded honorable mentions for four of those categories. Congrats to all of our winners! 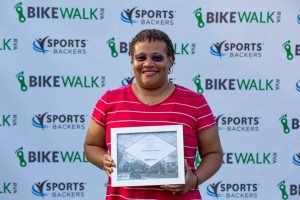 As we look to the future of RVA Bike Month (and with this year’s theme of Bike to the Future how could we not) we want to continue to build a calendar of events that are awesome, with dates that are easy to promote and communicate, that reaches more people from every corner of our region and every walk of life. We look forward to innovating as we continue to grow the month of events that you helped make happen for the sake of #morebikelanes. The website www.rvabikemonth.com is here to stay, and look for significant growth at that landing page for next year.

It goes without saying but needs to be said that the last two years of support from Bon Secours have dramatically helped RVA Bike Month reach more people, produce more and bigger events, and elevate the Richmond region’s efforts to the national stage. It’s great to have access to their Sarah Garland Jones Center as they work to improve access to active transportation and other social determinants of health in Richmond’s East End.

Remember to post your photos with #rvabikemonth, and we’ve got a growing collection of what we’ve seen in our RVA Bike Month Facebook album.