Kids Run RVA Coaches come from all walks of life. They may differ in age, race, and nationality, but all are drawn to Kids Run RVA by a desire to help others through active living. Everyone has a story, but none are quite like Changjwok Deng’s journey. Deng has been a coach at West End Presbyterian Church (WEPC) in Henrico County for five years and has been involved in the church even longer. When you meet Deng, you would never know the obstacles that he has been through because of his warm smile and welcoming personality. Through his journey, Deng discovered his reasons to smile. He is very passionate about his faith, helping others, and, of course, running!

Changjwok opened up about his journey and picks up the story when he was seven years old and living in an area of Sudan that is now South Sudan. In 1989, Deng’s father sent him to Khartoum, Sudan’s capital, to live with his uncle. His native region was undergoing a long civil war that ended with the referendum and creation of South Sudan in 2011. In 1995, Deng joined his elder brother’s family and migrated with them to Syria. Little did Deng know he would not go back to South Sudan or see his parents or the rest of his siblings again until 2010 as an adult. In Syria, Changjwok continued his education and graduated high school.

It was in high school that he also discovered his love of running. “I ran 100, 200 and 400 meters,” Changjwok recalls. “I was a sprinter!” After he graduated high school, he met and married his wife, Matbien. Together 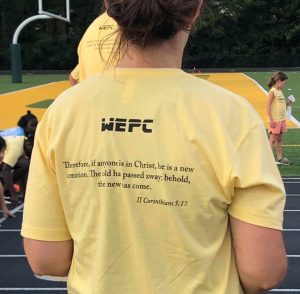 , they were granted refugee status and were resettled by Commonwealth Catholic Charites (CCC) in the United States. Finally, after a long period of waiting, they made the long journey over to Richmond in 2004. Changjwok and Matbien did not know anyone and could barely speak English. Shortly after they arrived, CCC enrolled them in English classes that were offered at West End Presbyterian Church, with the church just a short walk from their new apartment. At the same time, Changjwok was looking for somewhere to worship and he realized that in addition to hosting his language classes, WEPC was also a church.

In addition to the Dengs, WEPC was helping many other refugees in the community while offering language classes in their building. This was the Dengs’ first step in finding a community. After joining the church, Changjwok became more involved with their extensive outreach programs. He learned of the WEPC’s activities in the surrounding neighborhood, and eventually linked up with John McGurn and other members of the church through their physical activity programs, which includes a run club. Their mission is to help as many kids as possible. “We don’t just coach them at practice once a week,” Changjwok explained. “John tries to meet with them during the week and I stay in touch any way I can.” A lot of the kids in the WEPC are refugees from different countries like Changjwok, and WEPC is committed to helping them succeed with tutoring, langauge classes, and activity progams like the run club. Kids Run RVA is also proud to support the WEPC run club and help provide opportunities through active living and physical fitness. “John knew Faith and Jacki of Sports Backers and we met with them five years ago…their support has been huge.” said Changjwok, explaining that providing opportunities to take part in the Ukrop’s Monument Avenue 10k is particularly important to run club members. 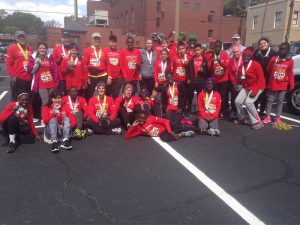 As a coach, Changjwok relies on his faith, the many supportive members of WEPC, and his own personal experiences to help motivate and encourage the members of WEPC’s run club. The goal is to create a community that can guide members through anything they face in life. “We are here to just be alongside them,” Changjwok said of the role of coaches. “Thinking, talking, helping with schoolwork. Just to be there for these kids means a lot.” At the WEPC run club, Changjwok loves sharing his passion for running and for his faith community.

Read the rest of our interview below:

Chaz Coleman: What are some traits that define you?

Changjwok Deng: I see myself as self-motivated, daring (taking on challenges), and enthusiastic. I am very hard working because being a refugee you learn that things do not come easy. This has pushed me and made me work even harder.

CC: At what age do you think you became an adult?

CD: When I was in Syria, my brother took his wife and they left to go to Italy for a better life. Since he was a student in Italy, he could only get an Italian Visa for his wife but not his daughter and me. During my entire high school career, I had to take care of my niece by myself. My brother sent money back but I had to pay all the bills and take care of her. It is like what a lot of my kids are going through now so I can relate. My brother is together with his entire family now and they have settled in the Netherlands. They are all happy!

CC: If you could write a self-help book, what topic would it be?

CD: It would be along the lines of don’t give up, or take it a day at a time. Especially with running, sometimes I feel like I can’t take another step, but I keep going and take it one step at a time. Before I know it, I am done with my run. You can look at life the same way.

CC: If you could meet anyone living or dead, who would it be?

CD: It would be my Dad. When I left my parents when I was 7, I never saw my Dad alive again. I spoke to him once over the phone. If I had a chance, I would love to see him again!

CC: Last question. Who is your role model? 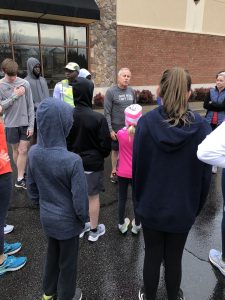 Changjwok and John at their first practice of 2020.

CD: As a refugee, you do not have the time to think about this question much. However, along the way you meet people who help shape you. There are a lot of people who I have admiration for, but I would say two people have really helped me. John McGurn has been an amazing guy to be around. Another person is Kevin Greene. He is my mentor. As a refugee, building  deeper and lasting relationship is not easy. Meeting and getting to know these men is such a blessing!