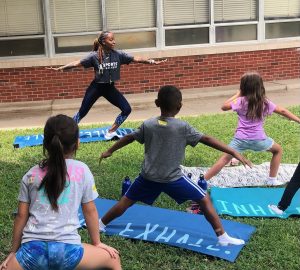 Vern Hamilton leading On The Move

After a full school year of all virtual programming, concluding with the 13-week Super Fit Challenge that ended on May 30th, Kids Run RVA was finally able to get back to in-person programming this summer! Through an expanded partnership with NextUp RVA, we launched a new ‘On The Move’ program at four Richmond elementary schools (Blackwell, Broad Rock, Chimborazo, and Fisher) and offered our long-standing ‘On The Run’ program at two middle schools in Richmond (Martin Luther King and River City). During the Richmond Public Schools summer session, which ran for five weeks, students attended classes in the morning and then engaged in enrichment activities in the afternoon. Masks were worn and social distance was maintained, but, more importantly, kids got to be kids, coaches got to coach, and programs got to be held in-person! 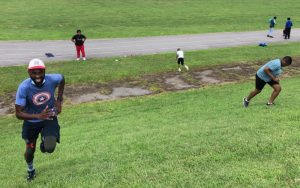 It wasn’t an easy feat, to say the least, but our team of instructors was certainly up to the task. We were ecstatic to welcome two new instructors, Arlene Cary and Vern Hamilton, while bringing back a few of the kids’ favorites, including Gene Parris, Kirk Chalmers, Jr., and Kisha Holloway. Perhaps even more exciting was having a volunteer coach join us at Martin Luther King Middle school for the summer. Not just any volunteer but Shyheim Holmes, a previous runner with our On The Run program at Henderson Middle who is heading off to run at the collegiate level this fall.

In watching Shyheim lead the next generation, the long-term impact of our programming became apparent. From our surveys this past year we know that, despite programming being virtual, the kids we worked with learned new exercises, got the support they needed from our coaches, were more active than they would have been otherwise, and had fun in the process! We know from their parents’ input that our program fulfilled a need that they may not have even known existed. In their feedback, parents let us know how important the activities were to their children, including one parent who said, “Our daughter was highly motivated to complete all of the activities in the workbook. She completed most of the first three weeks in the first two days. We didn’t realize how starved for purpose she was.” Another explained that “our kids are incredibly socially awkward and seeing other kids being normal kids was good for them. It filled a need.” 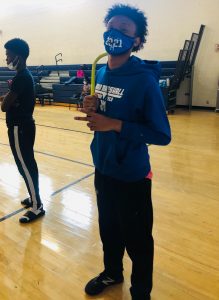 No matter what shape or format our program takes this fall, we know we will be there for the kids of RVA. There are needs in our community that we can help fulfill. We can help get kids moving. We can give them the support and encouragement they need. We can provide a safe space for them to have fun while trying new exercises and meeting new people. We can serve as role models for the kids who need us the most. We know because of our survey results. We know from the feedback we’ve gotten from parents. We know from the continued trust that the John Randolph Foundation, a major supporter of our programs, places in our organization. We know because of Shyheim and all the other kids like him that have benefitted from being a part of Kids Run RVA over the years.