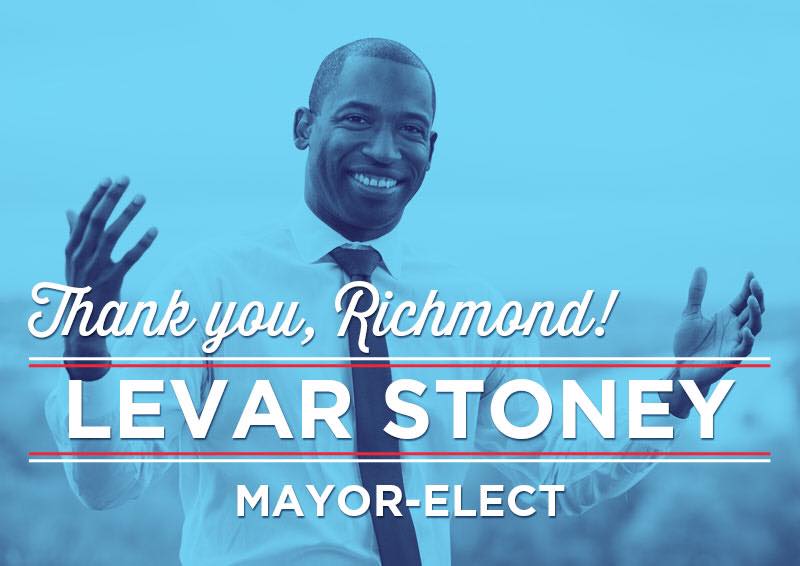 Today marks one week since Election Day. In case you were too distracted by what’s going on nationally to catch up on local politics, a 35-year-old go-getter named Levar Stoney was just elected Mayor of Richmond. Levar won the popular vote and five of nine council districts, so this is not a contested result.

I’m not going to dive into Levar’s background or his upbringing. You can find all of that on his campaign website. The only thing I want to highlight in this post is that Levar ran on a solid transportation platform that includes biking, walking, transit, and equity.

Here are a few of the highlights from his campaign webpage, “Levar’s Plan for Transforming Transportation in RVA“. In short, “Levar wants to make Richmond increasingly bike-friendly” and vows to:

Finally, “Levar understands that the ability to get around can make the difference in whether or not a family is able to get by and get ahead. We must do a better job long term of connecting residents to good jobs in an affordable way — 17% of our households do not own a personal vehicle” [our stats show that number closer to 21%].

No matter how you slice it, the future of equitable and active transportation options looks bright with Mayor Stoney in City Hall.

Speaking of which, on November 22 (5 to 7 PM) the City of Richmond is hosting a big public meeting to present plans and receive comment on over 20 miles of new bike lanes. Please come help fellow #RVAbike advocates ensure that our new bike lanes are designed to be car-free and comfortable for people of all ages and abilities. RSVP HERE