Welcome to the autumn update at Bike Walk RVA, and can I just say, isn’t it refreshing with the Fall Line in the air? Wait, did I say that right? 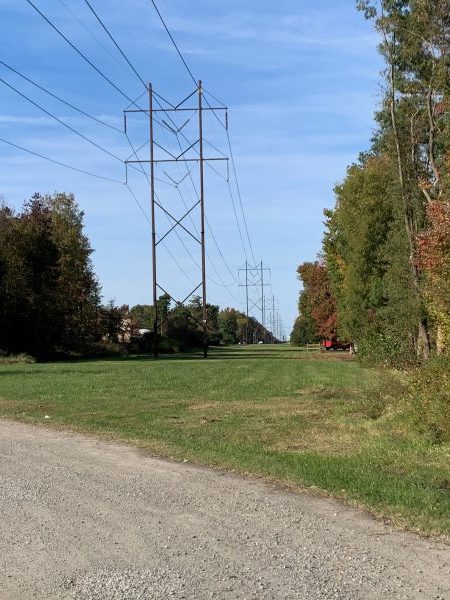 That’s right, the Ashland to Petersburg Trail has a new name! The Governor of Virginia, Ralph Northam, along with state and local elected officials announced the new name in October, the Fall Line, as well as its new look. Pretty snazzy, and we really can’t wait to see it completed. It can’t be understated that trails like this can’t be built without donations and grants. Our Fall Line Trailblazer fundraiser has raised over $8,000 so far to support the trail – thanks to all of you!

Feeling a little extra motivated, I decided to hike the Fall Line alignment a couple of weeks after the announcement, and you can see a series of the photos and some commentary from that hike on Bike Walk RVA’s Instagram (@BikeWalkRVA) in a story highlight reel. Some takeaways: it’s awesome! The trail has lots of variety in landscape, from quiet remoteness to downtown urban excitement. And I’m just not sure folks from all over the region are prepared for how awesome it will be to eventually be able to bike to 14 local taco places on the route.

Bike Walk RVA helped 26 partner organizations host candidate forums for Richmond’s city council and mayoral races. Never in Richmond’s history have so many candidates talked about bike lanes, sidewalks, or pedestrian safety. Great work to all of our partners and to all the candidates who participated, and we look forward to working with some new folks and some familiar faces in January and beyond!

I can’t help but use our Academy as a reflection of how long Bike Walk RVA has been a program at Sports Backers. Our first was in 2014, and we just completed our eighth full Academy via Zoom, this time focusing on sidewalk advocacy. It’s a wonderful feeling to welcome you into the family. Congratulations to our new Champions, and we can’t wait to work with you to get #MoreSidewalks!

The AARP grant-funded street mural traffic calming project for Southside has been delayed to spring due to some administrative retooling in City Hall’s process, but we look forward to working with our friends there when things warm up!

October is Pedestrian Safety Awareness Month. It is a time to be more aware of people walking, in part because it’s dark earlier now. It’s also late enough in the year to get a sense of how our traffic fatality statistics are looking. Unfortunately, pedestrian fatalities are up in many of our region’s localities. They are also at an all time high across the Commonwealth. The number one factor in whether a crash will be deadly is impact energy, which is to say, speed. Speeding-related fatalities are up 15% during the pandemic, despite lower driving rates and a 15% reduction in the number of crashes. What this means is that crashes are more deadly this year. Less congestion means more people are driving faster, and that impact energy hits peoples’ bodies harder.

For the second year in a row, Richmond Families for Safe Streets, supported by Bike Walk RVA, joined three other chapters of Families for Safe Streets from around the Commonwealth to observe the World Day of Remembrance for Road Traffic Victims. Seven state senators and delegates, a commonwealth’s attorney, and a school board member joined to hear victims and survivors of traffic crashes tell their stories and to talk about policy objectives for the upcoming General Assembly session. The focus? Reducing speeds in order to save the lives of Virginians. Thanks to all who joined in a heavy and powerful session, and we look forward to working with you in January.

Thank you for following in this work. And in this trying time, your support for Bike Walk RVA means a lot. Shoot us a few bucks – if you can – if you’ve enjoyed a nice bike lane or sidewalk recently, and we can keep ’em coming to the very best of our ability.