Ashland to Petersburg Trail: A Spine for Regional Transportation 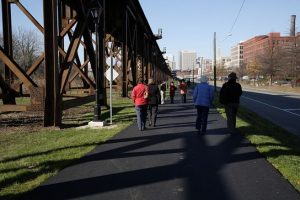 Central Virginia is no stranger to the concept of a multi-use trail. Construction of the 51.7 mile Virginia Capital Trail, which courses through Richmond, Henrico County, Charles City County, and Williamsburg, was completed in 2015 and experiences about 1,000 daily trail users. Every day people are out on the trail biking to and from work; running, walking, and biking for fitness; and taking water and snack breaks at local businesses.

What Makes Ashland to Petersburg Different? 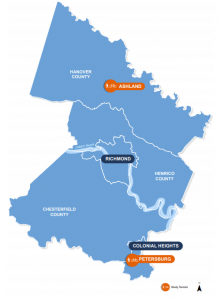 The Virginia Department of Transportation (VDOT) launched a study this spring to determine a preferred route for the Ashland to Petersburg (ATP) trail. Depending on the study results, the trail would be approximately 41 miles in length and traverse through seven localities – the Town of Ashland, Hanover County, Henrico County, Chesterfield County, Richmond, Colonial Heights, and Petersburg. Unlike the Virginia Capital Trail, which largely routes through rural landscape, the ATP trail would follow a route through urban, suburban, and rural landscapes. These varieties of landscapes will translate to some differences in how the trail will structurally look in different areas along the way, but two key things should be consistent – signage so that users know they are on the ATP trail, and protected separation from vehicles to ensure the trail is friendly to people of all ages and abilities.

Several sections of the ATP already exist or are planned in localities’ comprehensive and special area plans, including the existing Ashland Trolley Line Trail and Chester Linear Park, and planned Trolley Line Connector in Henrico, Brook Road protected bike lanes in Richmond, and the Northern Jefferson Davis Special Area Plan in Chesterfield. The ATP trail is an opportunity to “connect the dots” and establish another long-distance trail that provides opportunities for active transportation, recreation, and economic development. 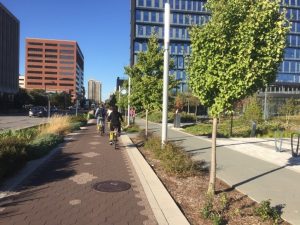 Multi-use bicycling and walking trails not only provide safe, separated spaces for people to get around or enjoy being active outside, but also can offer profound economic boosts to an area. The Indianapolis Cultural Trail (pictured left), in the heart of Indianapolis’ downtown, opened in 2008, and estimates say it has helped create more than 11,000 jobs and a $1 billion economic impact in the area since opening.

In Minnesota, the Minneapolis Midtown Greenway opened its first segment in 2000 and was fully completed in 2007. It generated at least 11 separate development projects (10 of which are residential) between 2004 and 2014, resulting in more than $750 million worth of new housing. 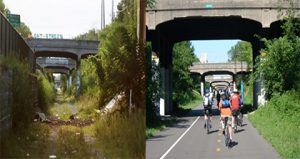 Minneapolis Midtown Greenway, before and after

VDOT plans to complete the Ashland to Petersburg Trail corridor study in early 2020. Once completed, localities will be in a position to seek funding for segments of the trail. Stay connected on the progress of this project – sign up for Bike Walk RVA updates so you can get all the latest news and information.