The Richmond region is a great place for riding bikes, and it has been for a long time. It’s shown in the steeped culture and deep-rooted organizations that either focus on bike riding or otherwise seamlessly incorporate bikes into their work and programming. As the eighth year of RVA Bike Month has come and gone, it is clear that this platform is as much about the community of biking that already exists in Richmond as it is about creating something new.

With many adjustments in 2021, RVA Bike Month returned with the slight twist of being rescheduled to October to maximize COVID-19 vaccine availability. The format was much the same: a planning party when volunteers contribute their ideas to what becomes the month’s calendar of events and opportunities, followed by the features themselves. But there were some new opportunities: pairing the Fall Line Trailblazer with the “fall” season, co-scheduling the Virginia Credit Union Moonlight Ride in bike month, and spooky themes for Halloween! Also of note is the Changing Lanes theme, an effort to highlight the Change Lanes to Pass law that took effect in July, our effort to change lanes to be better for biking, and the spirit of adaptability during this time of ever shifting challenges. The 5 weeks of programming started with a cleanup of Brook Road’s bike lane and ended with a Halloween tour of Richmond’s spooky spots. With over 45 events, three dozen volunteer leaders, and 3,000 participants, it felt like a real bike month again!

And this couldn’t have been possible without the generous support of Dominion Energy, The James Center, and Gather RVA. A special thanks to Lucian Brinkley, this year’s Bike Month assistant, for many contributions.

For the first time ever, Bike to Work Day was able to use a route that is almost exclusively dedicated bike lanes, most of which were protected! As Jakob Helmboldt, Richmond’s Bicyclist, Pedestrian, and Trails Coordinator said at the host site (Gather Arts District) noting his ten years of service to the City, it takes patience but after a while the results become clear. City planner Maritza Pechin remarked on the future of bike planning and design, incorporated into plans like the City Center Plan and the Fall Line alignment.

Over 40 riders joined the ride from Northside to Gather using Brookland Parkway, Brook Road, 1st St., and 3rd St. to arrive safely and comfortably. This was supported by The James Center’s bike commuting seminar the early in the month which featured a panel of expert commuters to share their tips and advice. 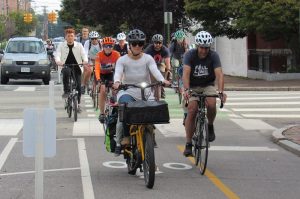 For the third year, we hosted the RVA Bike Month Awards to recognize some of those who have gone above and beyond to make biking better for all of us. It is a real privilege to work alongside each of these fine folks, and the remarks shared by each were heartwarming and hard-earned. Without further ado, it’s a pleasure to present these award recipients to you. 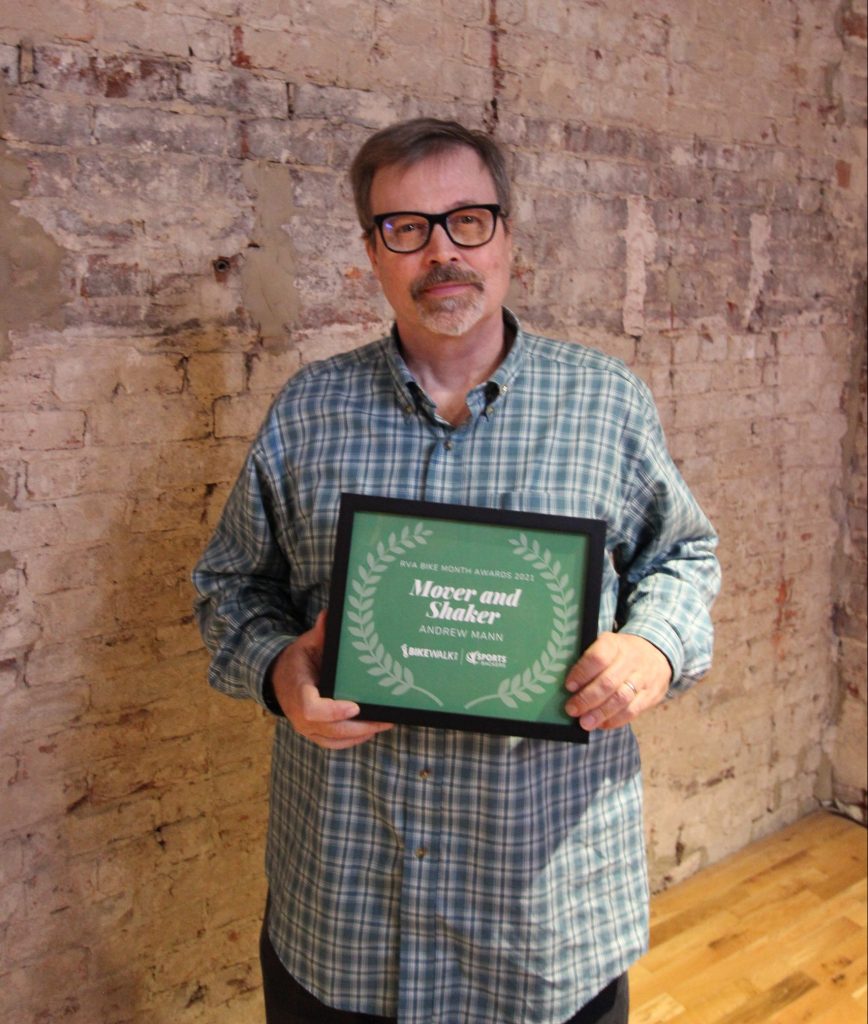 Andrew was recognized in particular for his leadership on the Richmond Area Bicycling Association and RABA Foundation project that provides hundreds of bikes for youth during the holidays. 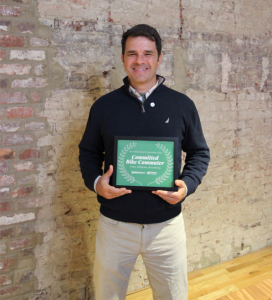 Phil could have won any number of awards, and this time was recognized for bike commuting to his office at PlanRVA during the pandemic and his subtle commentary through his Strava page. 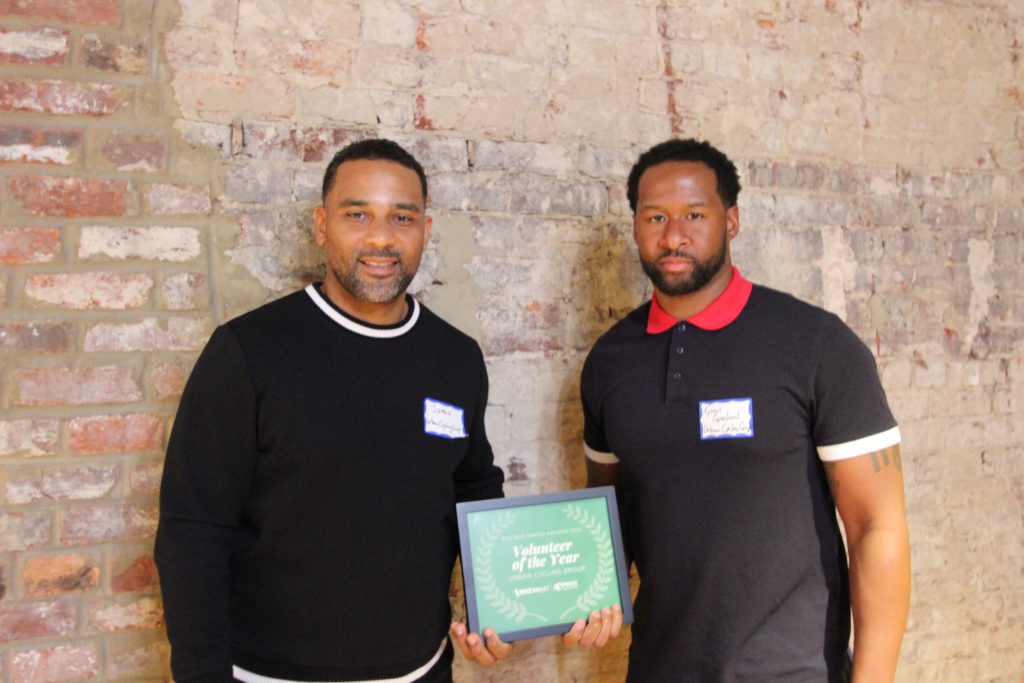 Urban Cycling Group has risen to prominence as a well-organized and popular riding club. Accepted by James Bennett and Kyron Copeland, they featured three Bike Month events in addition to several of their regular rides and guest appearances. 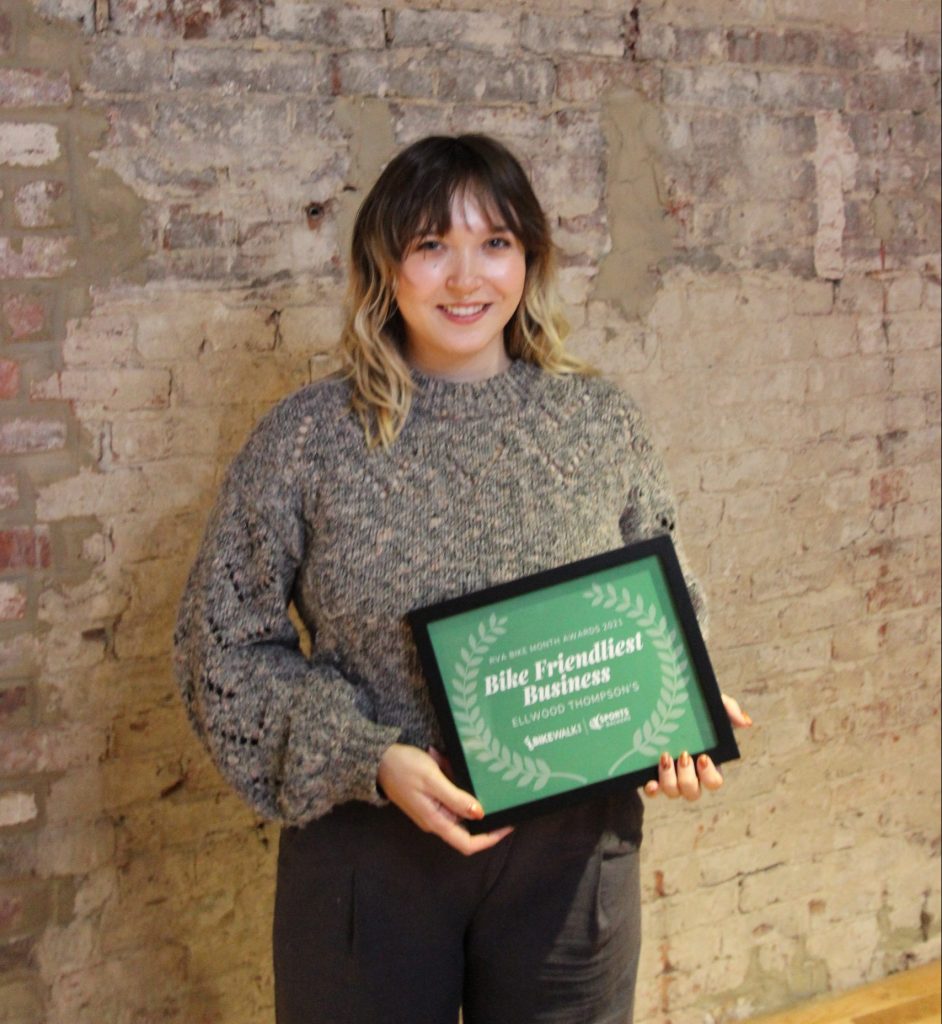 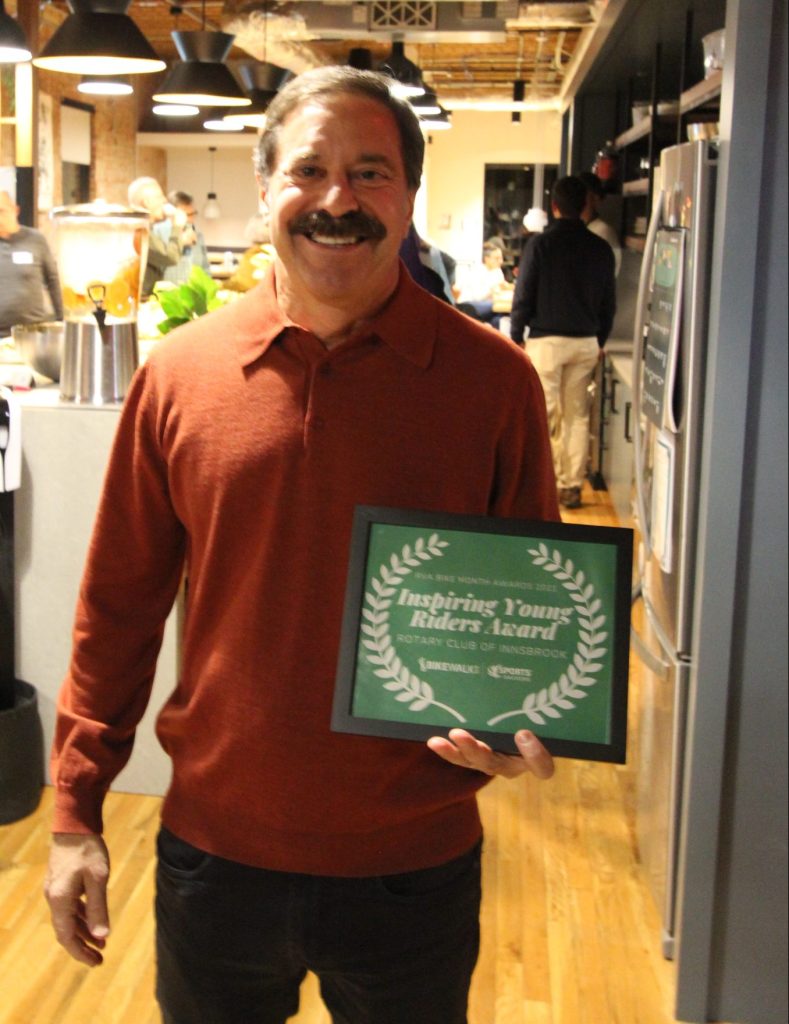 The Rotary Club of Innsbrook led a huge Spooky Spokes bike ride with at least 170 kids, parents, and volunteers to take advantage of the Halloween spirit this bike month in a family-friendly ride to support local law enforcement charities. Accepted by Gerard Shaia. 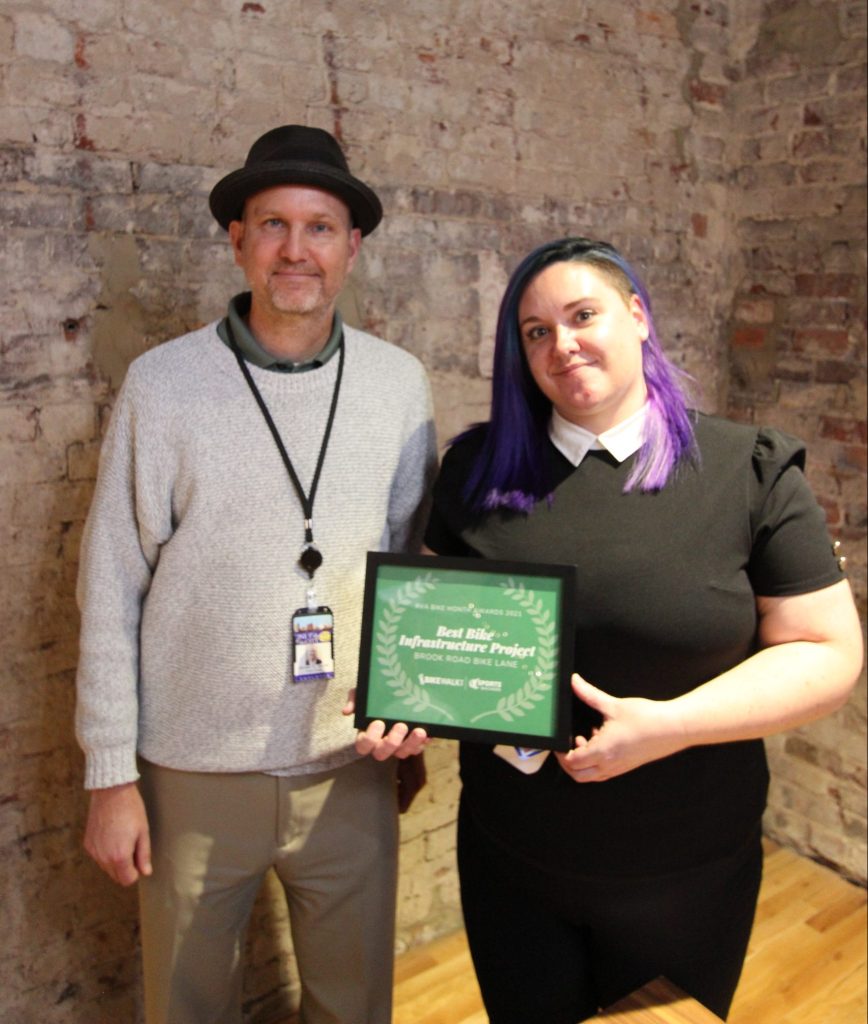 The Brook Road protected bike lane was well-earned by the Richmond Department of Public Works, and what a gem it is to ride its 3.7 miles of safe and connected goodness! Accepted by Richmond’s Transportation Engineer, Michael Sawyer, and Vision Zero Engineer Emily Dalphy. 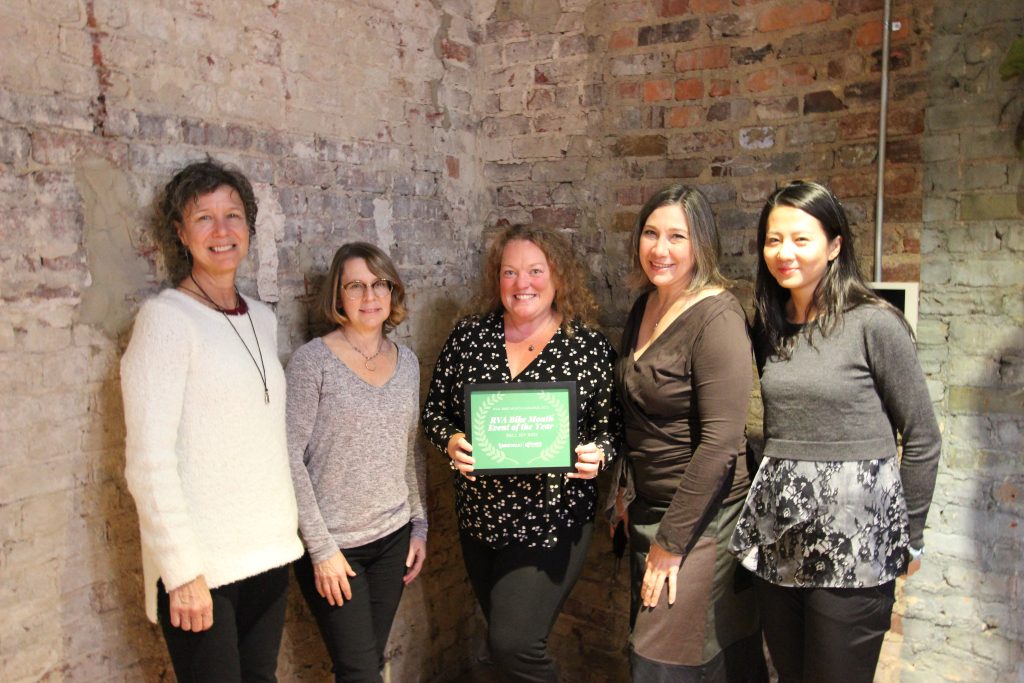 There is nothing quite like seeing almost 100 ladies riding mountain bikes together, and the Bell Joy Ride team has been doing amazing things on that front for years! Accepted by Carmen Hamlin and her team. 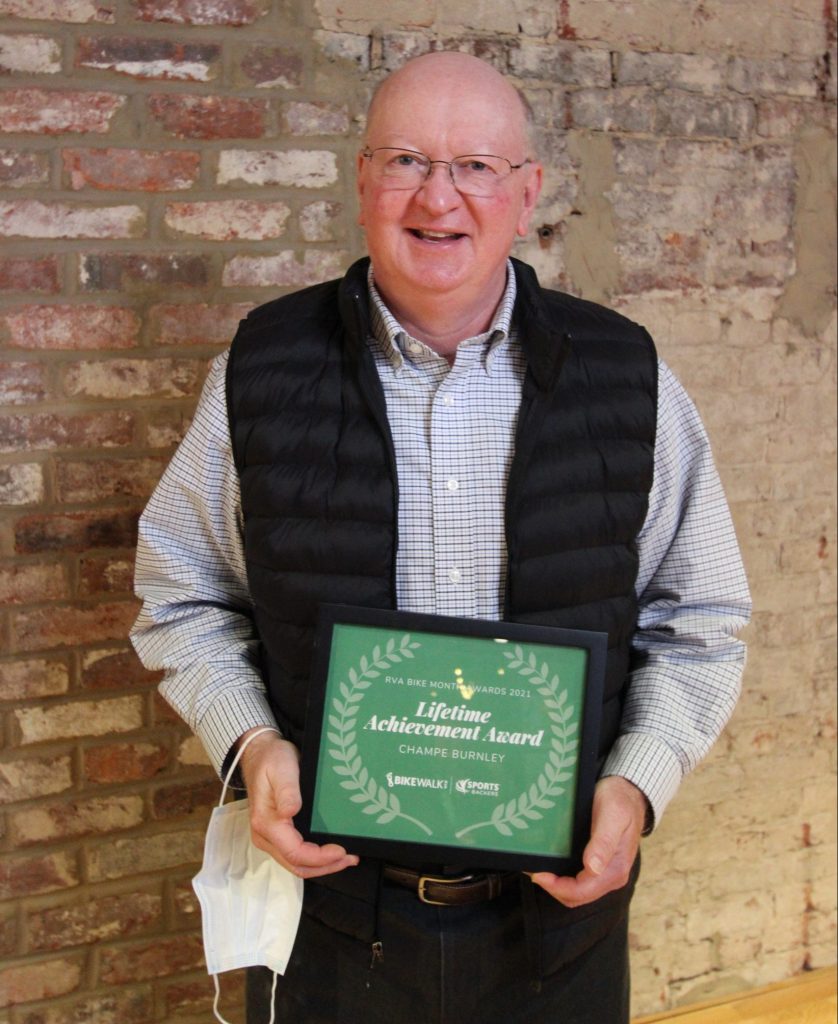 For many, Champe needs no introduction. With long and storied leadership with RABA and Virginia Bicycling Federation, he has contributed to Richmond’s and Virginia’s prominence as bike-friendly places for residents and visitors, regularly mixing it up at the General Assembly and on various boards and advisory efforts. From 3-ft passing and bikes on trains, to co-chairing the Mayor’s Commission for Biking and Walking and spearheading the forthcoming Eastern Shore Trail, if you can think of a bike related thing in Virginia, Champe was probably there.