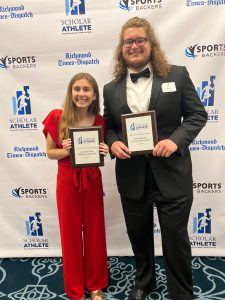 Richmond, VA – The Richmond Region’s finest high school scholar-athletes were rewarded for their hard work last night at the Richmond Times-Dispatch/Sports Backers Scholar-Athlete Awards ceremony which took place at The Jefferson Hotel, the first time the ceremony was held in person since 2019. Top honors and $5,000 scholarships went to Noah Hartsoe of J.R. Tucker and Gabriella Garcia of Midlothian. The $3,000 runners’ up scholarships went to Brett Bishop of Douglas Freeman and Madison McConico of Thomas Dale.

2022 celebrates the 31st year of the program that honors area scholar-athletes for their athletic, academic, and extracurricular achievements. Since the program’s inception in 1992, $1,357,500 in scholarships has been awarded to 624 outstanding student-athletes from the Richmond region.

The remaining 16 scholar-athletes won scholarships of $2,000 each. They were:

Additional scholarships for 2022 included the Cheryl Lockett Oliver Memorial Scholarship, which was awarded to Claudia Disbrow of Glen Allen High School, and the Raymond Delaware Patterson Memorial Scholarship, which went to Clarence Claiborne, Jr., of Petersburg High School. They were awarded scholarships of $2,500 each. Claiborne, Jr., will attend Albany College of Pharmacy and Health Sciences, and Disbrow will attend Roanoke College.

The Williams Mullen Community Impact Award was also announced, and the winner was the John Marshall Boys Basketball team for their work supporting families and organizations in the surrounding community.

Throughout the year, team members and coaches take part in numerous community services activities and campaigns, including a clothing drive for women and children living in shelters, the ‘JM Goes Pink’ and ‘Coaches for the Cure’ campaigns to raise awareness and funds for breast cancer, and an annual turkey giveaway to provide food items for community members each Thanksgiving. The honor includes a $2,500 award, which the team will use to expand their community outreach efforts in the future. The Williams Mullen Community Impact Award aims to recognize a Richmond region high school-based sports team for improving their community through volunteerism, fundraising, or other altruistic activities, and 2022 marks the second time the John Marshall Boys Basketball team has won the award, after earning the inaugural award in 2019. 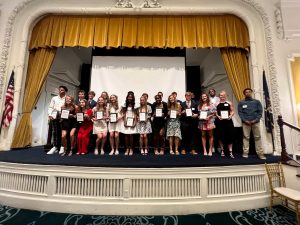 Richmond Times-Dispatch video host and local entrepreneur Kelli Lemon served as MC of the ceremony, with Richmond-based professional runner Keira D’Amato as the featured guest. D’Amato is the current American marathon record holder, and over the weekend she added to her impressive collection of performances by winning the USA Track and Field Women’s 6k Championship in Canton, Ohio, in a course record of 17:52. The entire ceremony was also streamed live on the Richmond Times-Dispatch website, and can be viewed on demand at the following link: https://richmond.com/2022-scholar-athlete-awards-ceremony/video_768e7a90-06ca-581e-8796-56eb455fca74.html

In recognition of the 50th anniversary of Title IX, Sports Backers and the Richmond Times-Dispatch partnered to produce a short video which included local athletic and community leaders sharing their perspectives and insight on the impact of Title IX. The video was shown during the Scholar-Athlete Awards ceremony and featured Julie Dayton, the director of athletics at St. Catherine’s School, and Carroll LaHaye, the head coach of the Randolph-Macon College women’s basketball team for 38 years, from 1982 until her retirement in 2020. The video is available for viewing at https://richmond.com/scholar-athlete-title-ix-anniversary-video/video_b4ba2a4d-eb24-5a08-a011-51fd7c044c88.html

With a key message of Let’s Go, RVA, the mission of Sports Backers is to inspire people from all corners of our community to live actively. A non-profit organization, Sports Backers is dedicated to producing nationally recognized quality sporting events and programs that motivate residents and visitors alike to be more active, supporting youth running and fitness programs, and advocating for safe and connected networks of bike and pedestrian infrastructure. Learn more at sportsbackers.org.