RICHMOND, VA – Sports Backers, a non-profit organization dedicated to inspiring residents from all corners of the Richmond community to live actively, is pleased to announce that Louise Lockett Gordon has been named the new Director of Bike Walk RVA. Created in 2012, Bike Walk RVA is a regional program of the Sports Backers to support bike and pedestrian friendly policies, programs, and infrastructure projects. 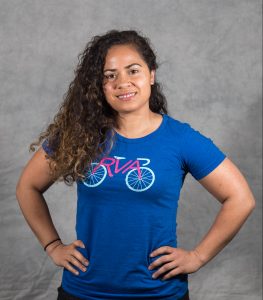 Lockett Gordon previously served as a Lead Organizer for Bike Walk RVA. In her new role as Director, she will advocate and mobilize support to encourage the construction of more safe, convenient, and connected places for people to bike and walk, as well as develop and maintain relationships with key local government officials, bike organizations, transportation officials, and others interested in building improved bicycle and pedestrian infrastructure. Lockett Gordon will also coordinate and organize support for annual programs that encourage biking and walking in the Richmond region.

Prior to Sports Backers, Lockett Gordon was a Senior Epidemiologist for the Virginia Department of Health’s Crater Health District. A native of Virginia Beach, Lockett Gordon graduated from the College of William & Mary, and earned her Master of Public Health degree from Eastern Virginia Medical School in Norfolk.

Lockett Gordon serves on the Executive Board for Zeta Phi Beta Sorority, Inc. – Richmond Chapter and the National Pan-Hellenic Council – Metro Richmond Chapter, is a member of the Richmond 300 Advisory Council, and is on the leadership team for the Richmond Chapter of Black Girls Do Bike. She has completed six marathons and has coached running programs for Girls On The Run, Black Girls Run!, and training programs for the Ukrop’s Monument Avenue 10k and Richmond 8k. She is also a Certified Group Fitness Instructor, having graduated in the Third Class of Sports Backers’ Fitness Warriors program.