The legislature has adjourned for the session but has not yet adopted its budget. Senators and delegates are expected to return in a few weeks to finish negotiating, to include conforming their two versions of the trails budget. The House included $57 million in multiuse trails, specifically delineating which trails are funded at specific amounts (including $14.9 million for the Fall Line). The Senate has included $50 million for multi-use trails, inclusive of up to $3 million to establish a Virginia Office of Trails. They are taking an extra step to legislatively appropriate $40 million of Virginia’s Transportation Alternatives budget, which is federal money, for multi-use trails. To some, that looks like $47-50 million for trails, to others, it looks like $90 million. The Fall Line would logically get a significant portion of that funding, to be determined by the Office of Trails and Commonwealth Transportation Board.

RICHMOND, VA [Dec 13, 2021] – After an unprecedented slate of funding dedications, the Sports Backers’ efforts to build the 43-mile Fall Line moved one step closer to being fully funded. Gov. Northam’s Dec. 8 proposal of $233 million for several multi-use trails in the Commonwealth is just the latest in a series of exciting recent announcements that highlight the importance of building active living spaces for all in Virginia.

Prior to Gov. Northam’s budget proposal, on December 3 the recently established Central Virginia Transportation Authority (CVTA) approved its first allocation of its regional transportation funding to include $104 million for the Fall Line. “This addition will truly be a gem for the area,” said Frank Thornton, chair of the CVTA Board and Supervisor for Henrico’s Fairfield District. “It will be a major plus for the area and region and personifies the spirit of regional cooperation.” 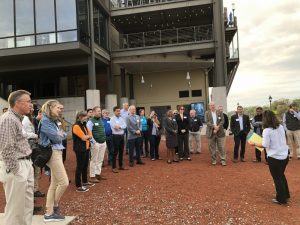 The CVTA is a regional authority that was created in 2020 to better position the region to take on key transportation projects. The initial use of these new transportation funds towards a regional multi-use trail project demonstrates that leadership have been listening to residents, businesses, and visitors when it comes to active living – people want to recreate and travel to work, school, parks, restaurants, and more by biking and walking.

Jon Lugbill, Executive Director of Sports Backers, said the move reflects years of growing support for active transportation networks. “Having worked with staff, officials, and advocates to increase safe biking and walking infrastructure in the region, we saw the opportunity to ‘connect the dots’ of existing projects and establish the Fall Line trail that linked our region together,” Lugbill said of the collaborative vision for the Fall Line trail. “With local buy-in, we sought out the Virginia Department of Transportation (VDOT) to conduct a trail feasibility study, and in partnership with PlanRVA led the naming/branding process to name the trail as the Fall Line.”

The support continued the following week as the Commonwealth Transportation Board (CTB) announced it would dedicate $42 million to the Fall Line on December 8. “This is a result of very deliberate efforts by the metropolitan Richmond region and the Commonwealth to build a dynamic multi-modal transportation system,” said Carlos Brown, member of the CTB for the Richmond District. “The commitment by the Commonwealth Transportation Board leveraged by CVTA’s investment will bring a project that in the past would have taken 20 years to realize into existence in one funding cycle. We are now long past the days where transportation projects in Central Virginia were merely aspirational. We now have the regional will, the tools, and the funding to make these projects happen.”

Louise Lockett Gordon, Director of Bike Walk RVA for Sports Backers, says this shift in focus to planning for multiple modes of transportation is built upon the voices of advocates across the region. “We started Bike Walk RVA in 2012, recognizing that if we want to inspire people to live actively, then we have to better integrate biking and walking into our transportation system,” Lockett Gordon said. “Our network of over 10,000 grassroots advocates has amplified that message to help bring us to this point. The Fall Line will be the regional active transportation spine around which a larger network can grow, so that people can get where they want and need to go by walking, biking, and connecting with transit.” 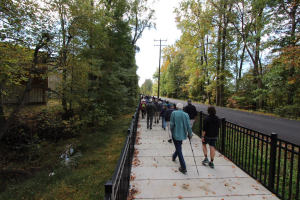 On the heels of CTB’s announcement, also on December 8, Governor Ralph Northam announced that $233 million in his proposed budget would go towards supporting the completion of the Fall Line, Shenandoah Valley Trail, and the Eastern Shore Rail Trail. “Not only do Virginia’s regional trails create safer alternatives for existing pedestrians and cyclists, they also attract thousands of non-local visitors each year, significantly enhancing economic development prospects for the localities they pass through,” said Secretary of Transportation Shannon Valentine of the announcement.

The Virginia Capital Trail and the New River Trail, for example, generate $9 million and $28 million respectively in annual economic impact. Statistics also show that more than half of the visitors to the Virginia Creeper Trail are coming from outside the area, boosting Virginia’s tourism revenue. Advocates expect to see similar impact when the Fall Line is completed.

In addition to transportation and economic benefits, regional trails like the Fall Line can be opportunities to introduce green space in areas where that is currently lacking. The trail will course through the Manchester area of Richmond, along Commerce Road and Bellemeade Road, as well as Route 1. This corridor could be reshaped to function as a linear park, and Councilwoman Ellen Robertson of Richmond’s 6th District believes this is going to be a wonderful addition for residents and visitors. “Richmond is home to many of the Commonwealth’s best outdoor recreational spaces – with several being in the 6th district,” Councilwoman Robertson said. “I am excited about the Governor’s announcement to help bridge the financial gap for the Fall Line trail that will go through Manchester and be a tremendous part of the diligent work that so many stakeholders have invested to make this possible.” 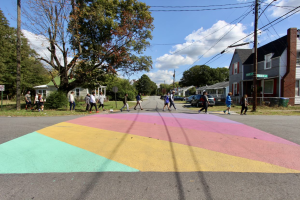 Lynhaven Ave to the nearby Fall Line alignment

Destination in the making

With the secured investments of local, regional, state, and federal funds and the hopeful approval of the Governor’s Outdoor Recreation budget, the Fall Line would be fully funded and poised to be built within the next five to eight years. “The multi-level funding commitment is unprecedented and truly amazing,” added Lugbill. “We’ve hit a turning point in our region in understanding the value of establishing world-class bike and pedestrian infrastructure.”

Having seen the success of projects like the Virginia Capital Trail, local leadership recognizes the Fall Line as a transformational project in the making. “The Fall Line further strengthens Henrico’s ongoing initiatives to improve our Brook Road corridor and transform the area into a destination for sports tourism, attracting hotels, new housing, restaurants, and more,” said Dan Schmitt, Supervisor for Henrico’s Brookland District. “This multi-level funding effort is another example of how strategic investment in public infrastructure is being leveraged to attract private investment and opportunities — with a focus on inclusivity and accessibility for all segments of our community.”

About the Fall Line

The Fall Line trail (www.falllineva.org/) once completed will be a 43-mile paved trail running from Ashland to Petersburg. The Sports Backers efforts to build the Fall Line has received support from all seven jurisdictions along the route including Ashland, Hanover, Henrico, Richmond, Chesterfield, Colonial Heights and Petersburg as well as PlanRVA, Crater Planning District and Virginia Department of Transportation. When complete, the Fall Line will connect rural, suburban, and urban landscapes and connect a multitude of places of interest.

Key connections along the trail:

About Sports Backers
With a key message of Let’s Go, RVA, the mission of Sports Backers is to inspire people from all corners of our community to live actively. A non-profit organization, Sports Backers is dedicated to producing nationally recognized quality sporting events and programs that motivate residents and visitors alike to be more active, supporting youth running and fitness programs, and advocating for safe and connected networks of bike and pedestrian infrastructure like the Fall Line trail. Learn more at www.sportsbackers.org.