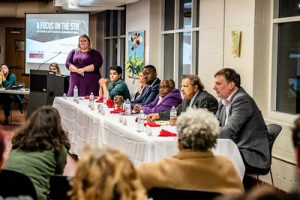 On November 5, 2019, residents of the 5th District will vote in a special election for a new City Council member. Bike Walk RVA, in partnership with organizations in Richmond Mayorathon, administered a candidate questionnaire to each person running for the 5th District City Council seat to see where they stand on issues relating to biking and walking in Richmond. We asked questions on the following five topics, and the responses from candidates running in the 5th District are recorded below:

Update: As of October 11, 2019, Graham Sturm has dropped out of the City Council district race, though his name will still appear on the ballot.

Establishing safe and accessible places for people to bike and walk will require capital funding for infrastructure.

If elected, would you commit to $1 million per year of City funding for pedestrian and bicycle improvements?

Where, specifically, would you invest in better pedestrian and bike infrastructure? What do you see as the major safety and mobility challenges facing pedestrians and people on bikes as they move around the 5th District?

Stephanie Lynch: We have a cultural, resource, and access problem with regards to bike and pedestrian safety in our City. Culturally, we have to work to educate our residents starting in their behind the wheel training to better accommodate all occupants of the road. In terms of resources and access, we know that investing in sidewalks, bumpouts, high visibility crosswalks, and protected bike lanes all make a meaningful impact in preventing unnecessary traffic fatalities. With regard to specific projects, I think we have to hear from our local neighborhood associations, to embrace and fund suggestions such as creating a connected green way between the Maymont, Carilion, and Byrd park neighborhoods, implementing stop lights and high viz cross walks on Semmes, and more. Much of the funding to achieve these goals could be leveraged through increased enforcement of traffic and moving violations, as well as State and Federal level grants for Vision Zero projects. I would also like to see further implementation of the RVA Bike Share program south of the river. The concept behind a robust bike share system in Richmond has to based upon equitable access in residential communities across Richmond, not just in wealthier neighborhoods and downtown. Further expansion of the RVA Bike Share would mean increased low cost transit access for families, students, and workers, as well as potentially more commerce and foot traffic in less affluent neighborhoods. We have to make more affordable annual passes available, as well as partner with private interests in the City to sponsor the expansion of stations in order to make this a reality.

Jer’Mykeal McCoy: I will support expanding protected infrastructure for cyclists and pedestrians across our entire city, prioritizing the roads and intersections that have seen multiple collisions. The Semmes/Forest Hill corridor stands out. Speeding on this road is a hazard for drivers, cyclist, and pedestrians.

Thad Williamson: We need to invest in improved sidewalks and bike lanes throughout the 5th District, guided by the existing Bicycle Master Plan. Current priorities in or adjoining the 5th District identified by the Department of Public Works include a bicycle corridor on Roanoke Street and painting identified bike lanes on Westover Hills Boulevard. My goal on City Council will be to assure that tangible progress is being made in the form of new capital projects or completion of existing projects to support bike and pedestrian infrastructure within the 5th District each and every year.

Ongoing public education aimed at motorists to promote safety and respect of bicyclists and pedestrians is an urgent need, as are other steps related to implementing Vision Zero.

Vision Zero is a strategy to eliminate all traffic fatalities and severe injuries, while increasing safe, healthy, and equitable mobility for all. In March 2016, Richmond City Council passed a Vision Zero Resolution (RES. 2016-R011) that “supports the development of a Vision Zero program for the City of Richmond with the goal of reducing traffic fatalities and serious injuries in road traffic to zero by the year 2030,” and in October 2017 Mayor Stoney signed a commitment to make Richmond a Vision Zero city. The City’s Vision Zero Action Plan includes legislative and budget actions that City Council could pass today.

If elected, would you implement and support the legislative and budget components of the Vision Zero action plan? Which of those would you prioritize and why?

Nicholas Da Silva: Yes. To achieve Vision zero, we must commit to removing as many cars off of our streets as possible. Cars have always been the source of traffic fatalities since their introduction onto our streets. City council must work with planners to make as many streets and paths accessible too low risks modes of transportation such as pedestrians pedestrian traffic, bikes, and other last-mile modes of transportation. Traffic that is motorized should be kept at a safe distance from other modes of transportation to reduce the number of fatalities in traffic accidents. We must generally work to build a car-free city city that is reasonably navigable by residents and tourists alike without a car. In the twenty-first century we should not be relying on hold we have more intuitive ways to move people around our cities and Richmond must adapt that.

Stephanie Lynch: Yes. This will be one of my top priorities on day one. We can’t create a more inclusive and equitable 5th District if residents can’t get around safely and affordably. I will advocate for pedestrians with all of the tools afforded to me on Council, and this starts by fighting for more money in the budgeting process to invest in crosswalks, bike lanes, high visibility signage, and traffic calming measures such as curb bump outs and speed bumps. This will also take long term structural changes such as the city wide lowering of speed limits in residential areas as proposed by Councilman Jones, consideration of multi-modality in future development and expansion, and education, particularly in our behind the wheel courses in RPS, centered around drivers’ relationship with pedestrians. We also have to engage with existing partners such as Bike Walk RVA to leverage grassroots engagement and fully fund their proposals. We have a beautiful and vibrant 5th District, but unfortunately right now, a lot of people don’t have meaningful access to all it offers because of how difficult we make it to get around without a car. We have to change that.

Jer’Mykeal McCoy: Yes. Last year, the number of pedestrians killed by drivers was more than doubled from 2017. That is unacceptable and we are clearly dropping the ball when it comes to protecting our neighbors and implementing the Vision Zero Action Plan. In addition to reducing speed limits, stepping up enforcement, and expanding protected bike lanes, and installing “curb bulbs” at high traffic area.

Robin Mines: It’s complicated. This is going to be a step by step process. Gradual steps in infrastructure, funding and educating citizens. Vision Zero is a great plan to make district and city safer for our children, pedestrians, cyclists, scooters and vehicles. We must educate our citizens prior to and during new changes infrastructure and traffic adjustments. We also need to reach out to our citizens creatively reinforcing common sense safety practices.

I would prioritize infrastructure, speed limit changes and educating citizens.

I also will champion and work with any neighborhood that wishes to become an enhanced penalty speed zone or to establish speed tables or other mechanisms to create safer streets—and assure that approved speed tables are fully funded. We need to pay special attention to streets around our schools, especially those (like Patrick Henry) on or near high traffic volume streets, to be sure that all kids and families can get where they need to go safely at all times.

We need to fund and implement the administrative and policy components of the Vision Zero plan, but there is no substitute for cultural change. Cultural change means driving within the speed limit, putting away the distractions, being alert to pedestrians and vehicles at every moment, and practicing defensive driving. I look forward to working with residents and community organizations in the 5th District to bring about the changed laws and changed habits needed to make the loss of life on our streets a thing of the past.

As Richmond continues to grow, so will the challenge of how to move more residents and visitors within the city limits by walking, biking, transit, car-share, driving, and future transportation options.

If elected, would you support establishing and funding a dedicated Richmond Department of Transportation? How can the City overcome its current disconnected planning process and begin to centrally plan, coordinate, and build multimodal transportation projects?

Stephanie Lynch: Yes. I think that this an excellent model for addressing this problem. We can not continue to silo these initiatives in DPU, DPW, and other City agencies when we are faced with such a systemic issue. A central Department would allow for more coordinated development and planning, easier cooperation with community organizations and transit oriented non-profits, and a more robust and dedicated funding mechanism in the long term.

Jer’Mykeal McCoy: Yes. I will commit to funding multimodal alternative forms of transportation that take cars off of the road, which leads to a safer and healthier environment for us all. We need to expand transit options through out the based on recommendations from Richmond300 (which I serve on).

Robin Mines: It’s complicated. I would support a Regional Transit System which would need to be discussed between the nine districts and surrounding County Boards. I would support legislation similar to the Funding Stream for Hampton Roads.

Thad Williamson: Yes. We urgently need a Department of Transportation led by a director oriented towards multimodal transportation in City Hall. The new department needs to integrate staff working on transportation-related issues currently dispersed in different departments, and it needs to lead the City’s relationship with GRTC. I saw firsthand the challenges our current structure posed for project management of  GRTC Pulse.  The idea of creating a Department of Transportation has been discussed inside the administration; I will support moving it forward should it be proposed this year.

Sports Backers is a 501(c)3 nonprofit organization and does not endorse candidates running for public office. For more information about safer streets projects and policies, join our email list! We’re always talking about opportunities to improve our region’s roads and infrastructure.