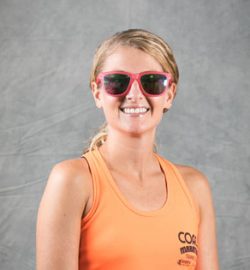 Kristen was a Sports Backers regular before she was officially on staff. As a Marathon Training Team Coach on Team Sizzle she helps runners reach their goal of completing 26.2 on race day. She found her love of running through the Ukrop’s Monument Avenue 10k, and from there she moved on to complete the half marathon and marathon in RVA. The 10k holds a special place in her heart because she loves the mix of runners, joggers, and walkers. Prior to working at Sports Backers Kristen received a Bachelor’s in Psychology and Criminal Justice and a Master’s in Criminal Justice, both from Virginia Commonwealth University. She went on to be a juvenile probation officer, and then began working in the mental health field. In her free time she is involved at her church, and loves catching a run with friends whenever she can. Not only are her and her husband parents to two kids (Max and Camryn), but two rescue pups (Leo and Charlotte) too. Kristen enjoys getting outside with with her family at Maymont or near the trails and the James River, and she also enjoys biking.

Celebrity you’d like to be best friends with: “I don’t really idolize celebrities or follow anyone closely but if I had to pick, I think Ellen Degeneres. She is hilarious and she loves animals.”

What did you want to be when you “grew up”: “I love a good mystery show – 20/20, Forensic Files. When I was younger I wanted to be a crime scene technician. The only problem is I have a weak stomach and cannot stand the sight of bodily fluids.”

If you could have any superpower what would it be: “Super Speed! That’s probably the only way I will ever qualify for the Boston Marathon.”