Experiment to navigate from Northside to the Capital Trail.

Richmond’s Strategic Multi-modal Transportation Plan, Richmond Connects, which was released in 2013 after two years of development, recommended extending connections from the Cannon Creek Greenway in Highland Park south to Shockoe Bottom and west to neighborhoods in Northside via Brookland Park Boulevard and Brookland Parkway. This would create a contiguous leg of a developing bikeway network that could connect diverse residential communities to areas of employment, commerce, and attractions.

With the recent installation of buffered bike lanes on Brookland Parkway, 18th St. and Oliver Hill Way, we decided to test the contiguity of this route. To evaluate how effective the signage is and to identify possible weak links in the chain, we sent a rider fairly unfamiliar with the area to ride the whole thing and back. That rider was our Bike Walk RVA intern Rachel, and below is her tale. 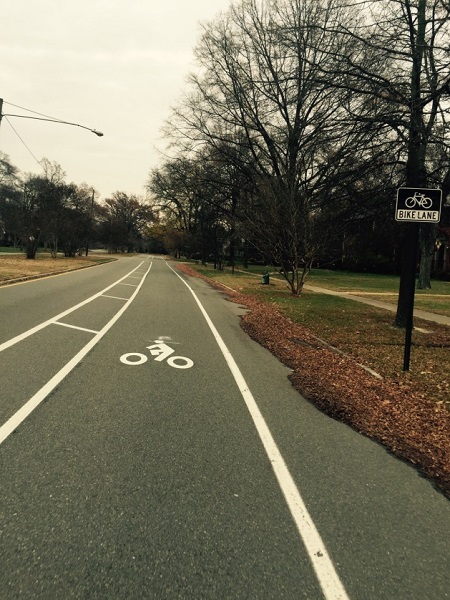 The ride started off great. The weather was chilly but I was warm from pedaling. I rode down Hermitage Rd to the buffered bike lane on Brookland Parkway. I loved riding in this bike lane because it is spacious and separate from cars, and the new hatch striping and signage enhances the comfort of riding in the bike lane. 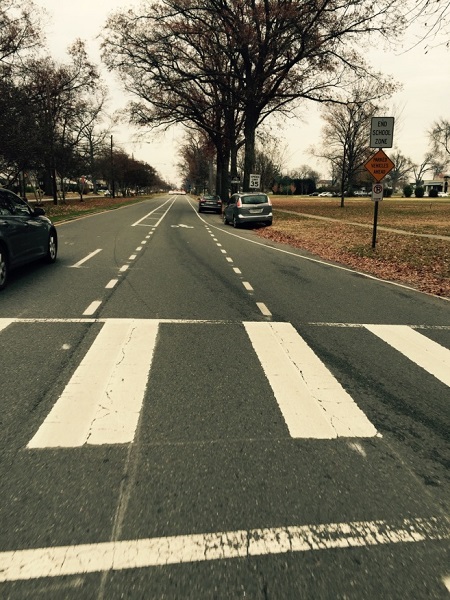 When I came up to these parked cars on the right side of the street it took me a second to figure out that they were supposed to be there. The sign on the side reads “Parked Vehicles Ahead”, and there is a speed limit and a bike lane sign. 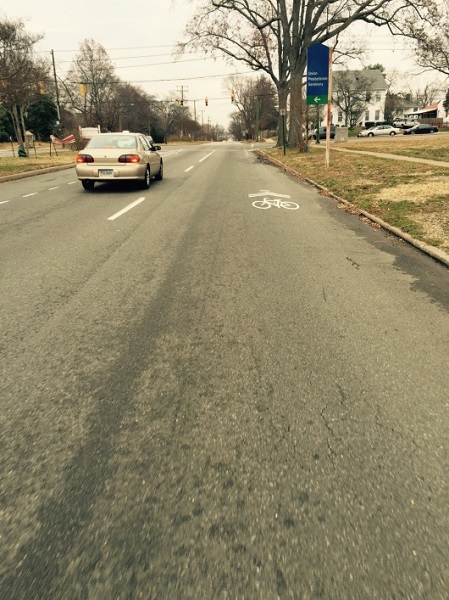 The bike lanes ends before the major crossing at Brook Rd, which is annoying.  There is no wayfinding signage before that intersection, so I just plug along hopefully. 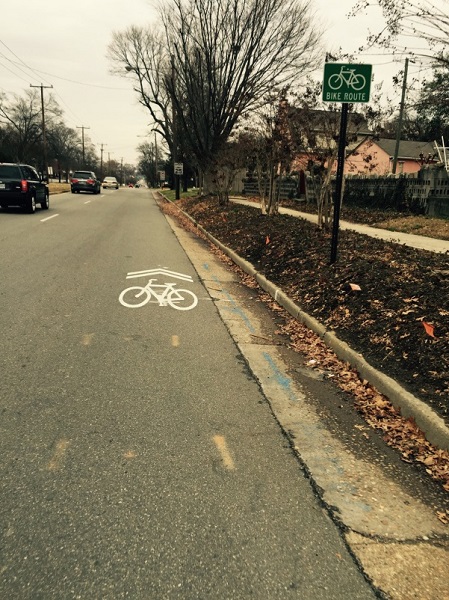 After I crossed over Brook Road onto Brookland Park Boulevard, the signs encouraged me that I was going in the right direction. 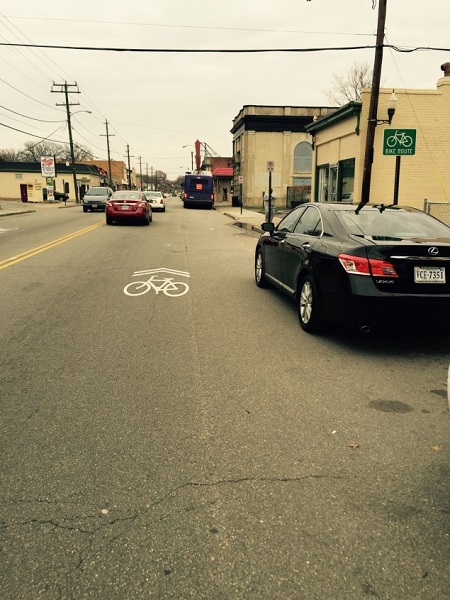 More bike route signage and sharrows as I proceed east into the business district. 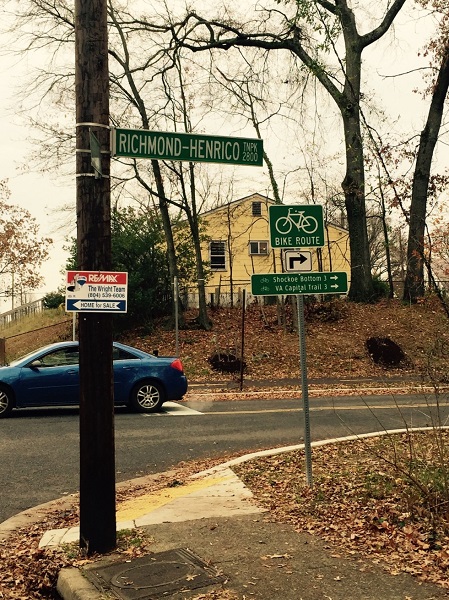 When I reached this sign at the intersection to turn right onto Cannon Creek Greenway I almost jumped for joy knowing I had successfully made it this far! 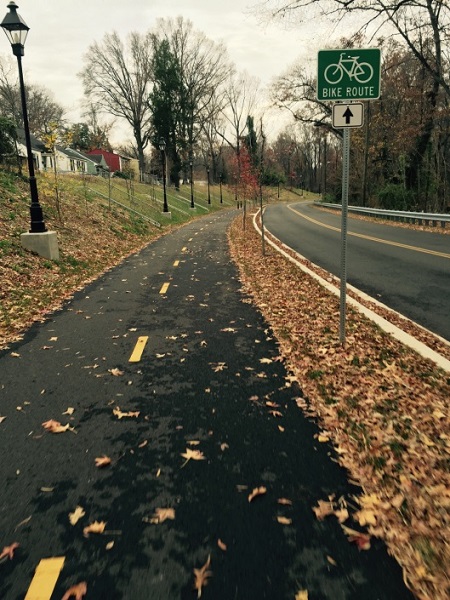 Riding on the Cannon Creek Greenway was peaceful and enjoyable. The Bike Route sign was helpful in reestablishing the bike route. 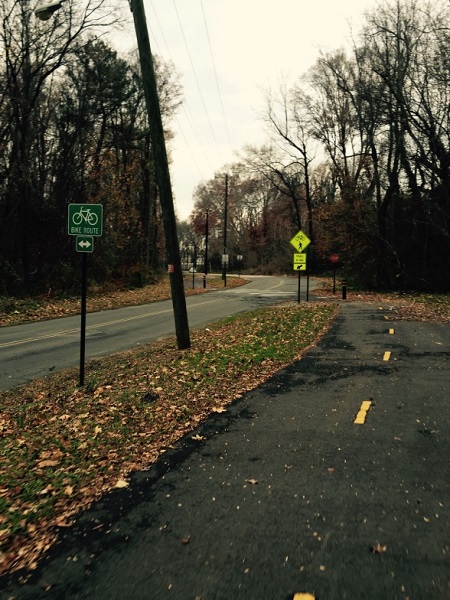 The new signage keeps drivers aware of potential bicycle and pedestrian crossings and allows the path users to know what is coming up and to proceed with caution. 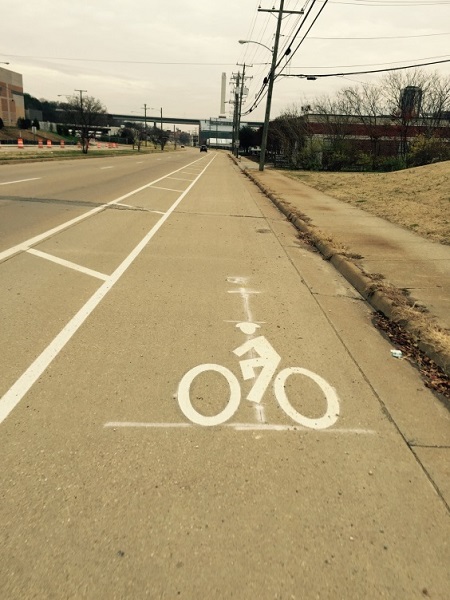 At the southern end of the trail, signs directed me to the glorious bike lane on Oliver Hill Way. There was not too much traffic on Oliver Hill Way, but because of the industrial environment, sometimes I feel like it is a hostile place and don’t feel too safe biking here. But the bike lane made me feel safer. 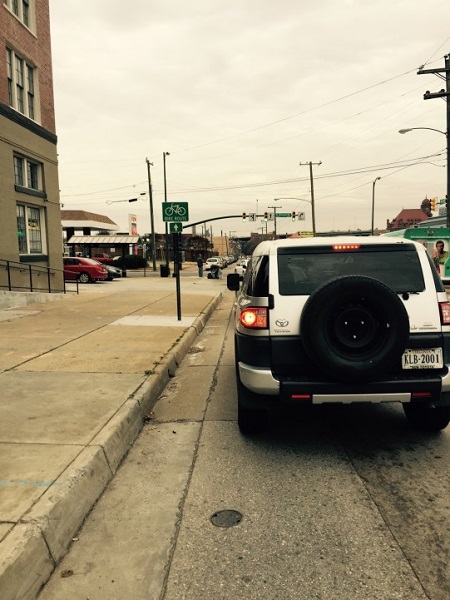 However, the Oliver Hill Way bike lane ended right where there was an off-ramp from I-95! My eyes had to balance watching vehicle activity and searching for signs to guide me, and a lone sharrow pointed me to go to the left lane. It was probably the safest route, but I am used to riding on the right side, so it felt a little wrong to be all the way to the left. 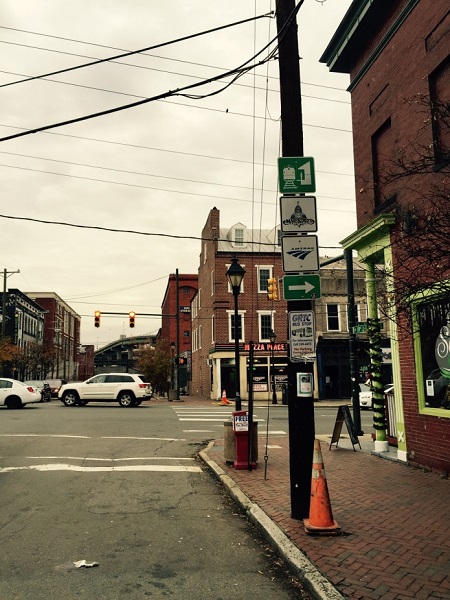 Oliver Hill turns into 17th Street and then turns into a one-way. The signs were helpful in guiding me from 17th St left onto E Grace St and right onto 18th St. Once I made it to the intersection of 18th and Main Street, the signs were very misleading. I went right and continued to climb up Main Street but did not see anymore bike route signs so I knew I was not going the right way. I turned around and used my internal GPS skills because I knew the whereabouts of where the Capital Trail ran. If I had been new to Richmond, I would have been a lost soul, for sure. 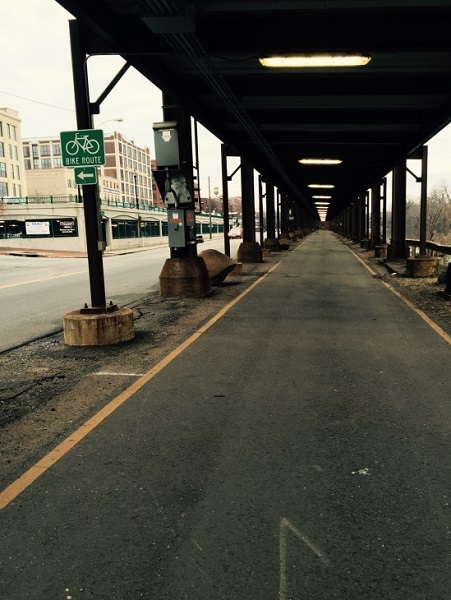 I eventually made it to the trail! The trail was wide, and it was pretty cool to ride completely protected from cars with the river right next to me. 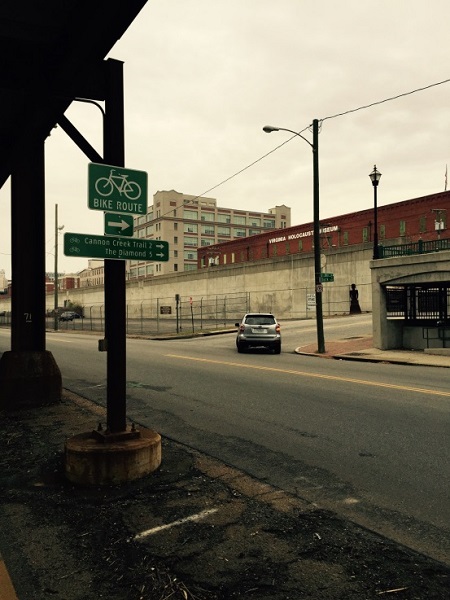 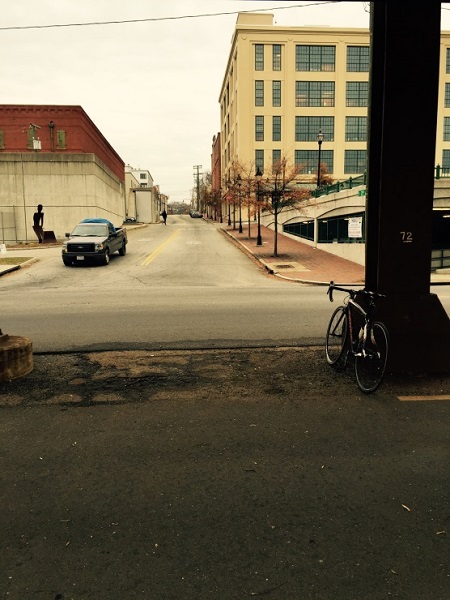 I’m supposed to turn here??? Crossing the street with no crosswalk and uneven pavement with heavy traffic zooming by? 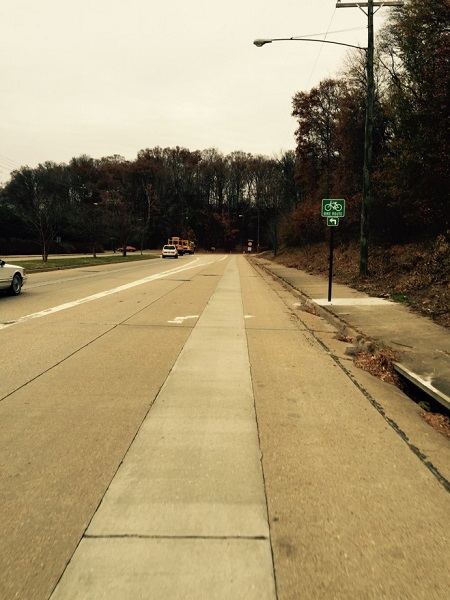 After getting turned around once more going up 21st Street because I missed the green Bike Route sign (because going back up was not the same route as getting down to the trail), I made it back to 18th St which turned into Oliver Hill Way. At the end of Oliver Hill Way, I was glad there was a reinforcing bike route sign but turning left onto Hospital Street required me to cross two big lanes of traffic. It would have helped to have a dotted bike lane or crossing way to make cars aware of the bicycle route and make me feel safer going through the intersection. 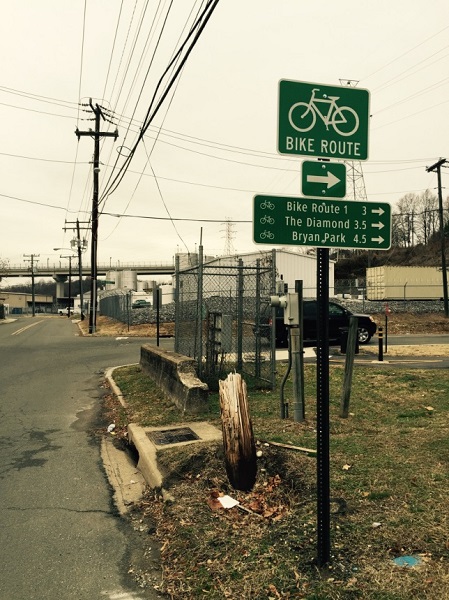 I did appreciate the Share the Road signs in the industrial area, and when I made it to this directional sign, I knew I was in the home stretch. This meant I only needed to go back up the Cannon Creek Greenway and then the left onto Brookland Park Boulevard would lead me back to Hermitage.

All in all, it was a pretty enjoyable bike ride. I definitely felt safer with the added bike lanes (and hatching) and additional signage. The signs pointed in the right direction, but were a little misleading when I didn’t know exactly where I was, especially in Shockoe Bottom. The idea is to connect the Northside to the Virginia Capital Trail via Shockoe Bottom. The path was not direct, and the signs did not lead me right where I wanted to be. The one-way streets did not help in guiding a direct route from point A to point B. However, never thought I’d say this, but the installation of new sharrows helped to define the bike route.