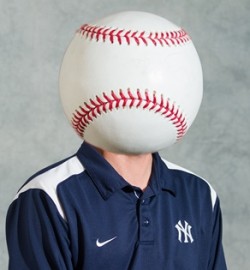 One of the original members of the Sports Backers crew, Scott is our Chief Strategic Implementation Officer as well as our resident archivist and historian. From old newspaper clippings, to past participant shirts, he knows all there is to know about Sports Backers. As our Chief Strategic Implementation Officer, he is responsible for projects and initiatives across the entire organization. His ideal Saturday consists of sleeping late and watching college football. At times he has a closer view of the action since he’s a part of the HooVision crew at UVA Football and basketball games (his alma mater). He also spends time on the sidelines at various events for his kids. He’s a parent to two great kids, as well as a dog, cat, chinchilla, rabbits, fish…and the kids are lobbying for a tea cup pig. A New Jersey native, he roots for the Yankees and spends plenty of summers on the Jersey Shore (Long Beach Island, N.J., to be exact).

What did you want to be when you “grew up”:  “When I was five, I wanted to work at Burger King (I thought I would get free food).”

Favorite Sports Backers Event:  “A tie between the Richmond Marathon and the Ukrop’s Monument Avenue 10k. The emotional reactions of finishers in both events is incredibly moving.”