Event updates, fun stuff, and encouragement...just a click away!

What is your favorite thing about MTT?

“My favorite thing about MTT and the one thing that I will always remember is the laughter! I’ve never laughed so hard, so long, over nothing and everything with so many people! The friendships I’ve made with both participants and fellow coaches will last forever. We joke about living together in an MTT coaches nursing home when we get older!”

How many years have you been with MTT, either as a participant and/or coach? Which team do you coach?

“I’ve been with the team as a participant and then a coach for 17 years. My fifth year with MTT, 2007, was my first year coaching MTT: Saturday morning early, Team Rainbow with Lynn Anderson. I have coached every year since with Lynn. Even though Lynn retired last year, all but one of the coaches came back this year to continue on with Lynn’s legacy of crazy!”

Do you have a favorite memory from your time with MTT?

“Many of my favorite memories of MTT actually are about other races that I’ve run with my MTT running friends. Besides several out-of-town marathons that I’ve either run or gone to in support of friends from MTT, I’ve run a 50k, a nude 5k, and a Ragnar trail relay. None of which I would have ever done without the support and arm twisting of my MTT friends! And many of those memories can never be shared! Most of my favorite memories with MTT revolve around marathon day. Most coaches will tell you that coaching Richmond is a day that is up there with Christmas, weddings. etc. We absolutely love coaching and helping our participants get to the finish line. Our team stays on the course until the last runner crosses the finish line.  Since most of us have coached for eight years or more, we have favorite traditions that evolve from one year to the next, to include getting the beer truck at the post-race party to stay open long enough for each coach to get at least one beer! Often on the first group run of the following year, one of the participants will come up to me and remind me of how I met them last year on the marathon at mile 20ish. They’ll say they were falling apart, crying, hurting, nauseated… and I gave them advice that kept them moving forward, and they let me know how much they appreciated my time and encouragement. One runner told me she was sick to her stomach. I told her to go behind a building, throw up and then keep running. A few miles later she found me again on the course and thanked me. She said she took my advice, and felt much better!” 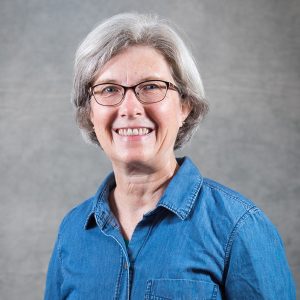 What would you say is the biggest benefit that the program provides?

“The biggest benefit of the program and MTT is accountability. When the runs get hard, hot, inconvenient, time consuming, it is very easy to push it off until tomorrow. But if someone is counting on you to show up, and you’ve already paid for it, you tend to make the commitment and run that weekday or early weekend run. One of the reasons I coach is because I know I have to show up every Saturday. I tend to be lazy and need a reason to do my weekday runs.”

What is the biggest piece of advice you would give to someone looking to start training for a marathon?

“The best advice is to follow the program. It works. Don’t mess with it too much.  Do as much as you can (no one ever does every single run- at least I don’t think so!). Don’t try doubling up the mileage on a make-up run for a lost day. Listen to your body and don’t overdo it! Relax, have fun, run.”

“A typical Saturday group run begins with a little talk. We gather the group, cheer for teammates who are running out of town races that weekend, love on participants that are getting married, having babies, anniversaries (we are family), and encourage our teammates with a little training information before we take off on our run. We chit chat along the way about! We get back to the stadium, have a cold post-run treat, pat each other on the back and say, ‘see ya next weekend’!”

What inspired or encouraged you to become a MTT coach?

“My husband finally talked me into training for the Ukrop’s Monument Avenue 10k, which was my first race ever, when I was 43. I could not run to the end of my driveway, or climb the stairs with a basket of laundry without huffing and puffing. By that point, in April 2003, I ran all 6.2 miles of the 10k and to my surprise, fell in love with the sport. I decided to sign up for the marathon training team, which would be MTT’s second year, and decided that I would quit when it got too hard. I just wanted to keep my six miles so that I could go for a run once in a while. The next thing you know, I am standing at the start line of the Richmond Marathon, November 2003, wondering ‘how the heck did I get here’? Then, I crossed the finish line and was even more astonished at what my body could do. I was still in love with the sport that January, so my husband and I started a running group with our church and trained 40 people each year for nine years to run the 10k.  I continued to run with MTT team each year. Word got to Don Garber (former MTT head coach) that I was coaching our church team and he asked me to join the coaching staff at MTT.”

Do you have a favorite place to run in Richmond?

“My favorite place to run in Richmond is Iris Lane. Each year as we run, we all have to pick a house. It is the house that we hope to live in one day. From southern wrap around porches to modern sleek, your favorite home is on Iris lane!”

How many marathons have you done, and do you have a favorite memory or experience? What was your reason to run your first marathon?

“I’ve run 14 in total, from big races like the Philadelphia Marathon and Marine Corps Marathon to tiny ones Albany, Georgia, and Rehoboth Beach, Delaware. But the VCU Health Richmond Marathon is home. It will always be my favorite marathon!”

What do you like the most about the VCU Health Richmond Marathon?

“I’ve run Richmond five times, 2003 through 2007. I always encourage people to make Richmond their first marathon. With so many coaches willing to help both MTT and non-MTT runners, and spectators all over the city, Richmond really is America’s friendliest marathon.”

The VCU Health Richmond Marathon takes place on November 16, 2019, and registration is available at www.richmondmarathon.org.