Richmond, VA – The Richmond Region’s finest high school scholar-athletes were rewarded for their hard work last night at the Times-Dispatch/Sports Backers Scholar-Athlete Awards Dinner at The Jefferson Hotel. 2018 celebrates the 27th anniversary of the program that honors area 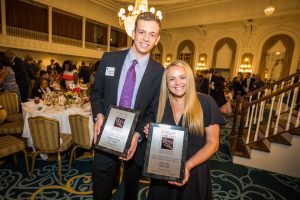 scholar-athletes for their athletic, academic, and extracurricular achievements. Since the program’s inception in 1992, over $1 million in scholarships has been awarded to 536 outstanding student-athletes from the Richmond region.

New scholarships for 2018 also included the Cheryl Lockett Oliver Memorial Scholarship, which was awarded to Samiya Jackson of Thomas Jefferson High School, and the Raymond Delaware Patterson Memorial Scholarship, which was awarded to Christopher Jones, Jr., of Petersburg High School. Both Jackson and Jones were Scholar-Athlete of the Year representatives for their schools. Jackson will attend Xavier University, and Jones will attend the University of Virginia, and they were awarded scholarships of $2,500 each.

HCA Virginia Sports Medicine also presented its male and female Comeback Athletes of the Year at the dinner. The awards recognize high school athletes who have overcome major injuries or illnesses during their careers and returned to playing their sports. The male winner was Jeb Boswell, a football player at Lee-Davis, and the female winner was Morgan Whitaker, a lacrosse and field hockey player at Deep Run. They each received a $1,000 scholarship and a $500 donation to their respective high school.

Andre Ingram, a Richmond native whose 10-year journey to the National Basketball Association and standout performance with the Los Angeles Lakers in early April captured the nation’s attention, served as the featured guest during the 2018 Times-Dispatch/Sports Backers Scholar-Athlete Awards Dinner and shared his motivational and inspirational story with the audience. Ingram is a Highland Springs High School graduate and was the Times-Dispatch/Sports Backers male Scholar-Athlete of the Year in 2003 before going on to a highly successful four-year career as a student-athlete at American University and embarking on his professional career.